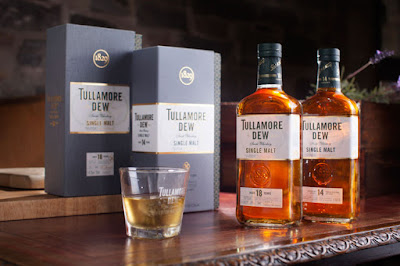 These two new whiskeys are the latest to join the range of popular Irish brand Tullamore DEW.  They are limited editions and single malts. Both the 14 years old and 18 years old expressions have undergone a rare cask combination for maturation - they have been predominantly matured in ex-bourbon casks before being transferred to a mix of ex-Oloroso sherry butts, ex-Port pipes and ex-Madeira drums. They were launched in tandem at the lavish Harrods department store in central London in mid-August.

Tullamore DEW was originally distilled in the village of Tullamore, County Offaly in central Ireland in 1829. Tullamore is the anglicised version of Tullach Mohr. The Tullamore distillery was founded by Michael Molloy before passing to Daniel E. Williams in the 1880s. Williams had worked at the distillery as a teenager in the 1860s and had worked his way up to the position of General Manager.

Williams was a major innovator - he introduced electricity and the telephone to Tullamore village and its distillery, making it one of the most modern whiskey making facilities at the time. Williams also gave his name to his whiskey by combining the town's name with his initials, hence Tullamore DEW. The distillery closed in 1954 and fell into disrepair.

William Grant & Sons, the current owners of the brand, opened a new distillery on a 57 acre site in the brand's spiritual hometown of Tullamore and the first spirit flowed in August 2014. With Tullamore DEW currently the second biggest selling Irish whiskey brand behind Jameson, the new pot still facility is to help maintain the current level of growth and demand for the product.

The Tullamore DEW 14 years old has been made from a batch consisting of 200 casks.  It will retail for £59.95 a bottle.  The batch for the 18 years old is much smaller and consists of just 20 casks.  This will cost £99.95 a bottle.  Both are bottled at 41.3% ABV and will be available from specialist whisky retailers worldwide, while stocks last. 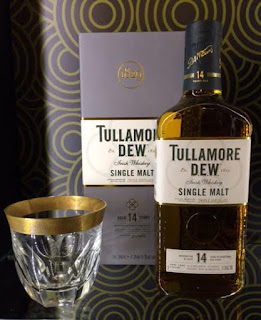 Tullamore DEW 14 years old
This whiskey has been matured in ex-bourbon casks for 13 and a half years before being split and matured for a further six months in that rare combination of ex-sherry, ex-Port and ex-Madeira casks.  These casks are then married for a short period.

This is extremely fruity on the nose and exhibits plenty of aromas - think of green apple, peach, pineapple, lemon zest and mango.  Underneath are further aromas of honey, vanilla and golden syrup, which are complimented by hints of cinnamon, ginger and green banana.

On the palate this whiskey feels soft and gentle, fresh and fruity.  The leading notes are of fresh green apple and pear backed up by delicious toffee, honey and golden syrup.  Then the tropical notes from the nose come through, particularly the mango.  These are joined by some delicate baking spices (think of cinnamon, nutmeg and a pinch of ginger), bittersweet notes cereals and dried grass plus hints of milk chocolate, candied lemon and the merest background element of white pepper. 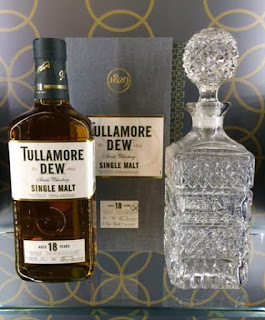 Tullamore DEW 18 years old
This expression has been matured in ex-bourbon casks for just over 17 years before undergoing the same rare three cask finish as the 14 years old version (ex-sherry, ex-Port and ex-Madeira), this time for 11-12 months.

The nose is soft, fruity and spicy.  There are immediate aromas of malty cereals, oaky wood spices and baked apple.  Underneath are subtle aromas of dried fruit that are most reminiscent of raisins, sultanas and candied orange peel.

On the palate this whiskey is velvety, rich and fruity.  the dried fruit in particular are more prominent than on the nose.  There are plenty of raisin and sultana notes, backed up by candied orange.  This gives a feel of fruit cake. These are complimented by bittersweet malted barley and plenty of background warming wood spices - think of cinnamon and all-spice - plus some ginger and honeyed almonds.  There is a distinct honeycomb (like in Maltesers sweets) also, plus with hints of milky coffee and tobacco leaf.


What's the verdict?
These two new Tullamore DEWs are both excellent whiskeys and ones that show how good aged Irish single malt can be.  The 14 years old is lighter, grassier and more tropical while the 18 years old is richer, sweeter and a bit heavier and more robust.  They offer something different to the consumer but you will have to be quick if you want to buy either, especially the 18 years old expression.

posted by Whisky For Everyone at 8:40 PM