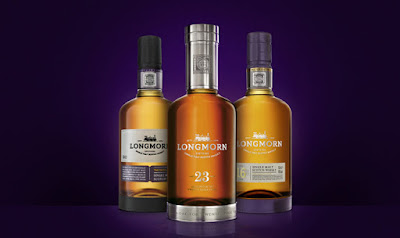 These three whiskies form the first permanent range from the cult Speyside distillery of Longmorn, which is regarded as one of the 'best kept secrets' of the Scotch whisky industry.  The Distiller's Choice, which was released earlier this year, is joined by a re-invented version of the 16 years old and a new 23 years old expression. The three whiskies have been created by Trevor Buckley, the Distillery Manager at Longmorn, and they are designed for the premium single malt drinker.

The Longmorn distillery was founded in 1894 by John Duff and is located about three miles south of Elgin in the Speyside region of Scotland.  It is currently owned by Chivas Brothers and the malt produced there has long been used in a number of the most famous blends on the market.  It is also one of the five whiskies that feature in the new Chivas Regal Ultis.  The distillery has recently been expanded and now has an annual capacity of 4.5 million litres. 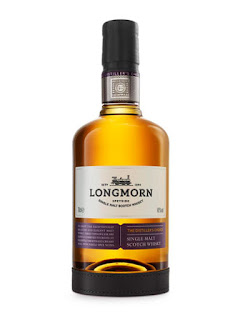 Longmorn The Distiller's Choice
This is the entry-level malt in the new range and was released in early 2016. It has been bottled at 40% ABV and has undergone maturation in three different types of casks – refill ex-sherry, first fill American oak and what was described as ‘traditional oak’.

The colour is golden yellow and the nose is immediately sweet and malty. There are aromas of toffee, caramel and malted barley, plus hints of white chocolate and candied orange. On the palate it is the sweetness that hits first with the toffee and caramel evolving into butterscotch with time. The malty note is never far away and adds a bittersweet dimension. Underneath are soft and gentle wood spices (especially cinnamon), warming ginger and hints of chocolate and orange. It feels velvety and viscous with other notes of honey and vanilla developing well. The finish is slightly short but sugary sweet. This element lingers as the malt and wood spices fade. 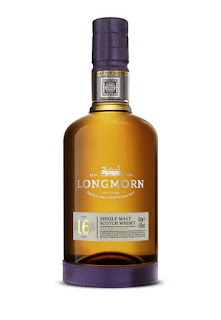 Longmorn 16 years old
This whisky is a re-interpretation of the current 16 years old. This version has a different mix of casks and a higher percentage of first-fill ex-bourbon and rare/old casks than its predecessor. It is bottled at 48% ABV and was described by Trevor Buckley at the launch as ‘pushing boundaries’.

The colour is golden yellow and the nose is packed with honeyed and orchard fruit aromas (think of pear and red apple especially). Underneath is a hint of malt and cinnamon. On the palate this whisky feels luxurious, smooth and creamy. Initially there are plenty of honey and vanilla notes that are joined by a distinct hit of red apple. This apple characteristic increases with time it seems. Then come toffee, caramel, stewed pear, warming wood spices (cinnamon and all-spice in particular) and a hint of dried peach and bittersweet malt. It feels very rounded and classy. The finish is of decent length with the spices lingering well once the sweet and fruity notes have all but gone. 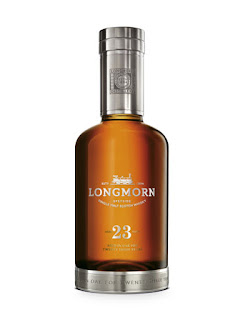 Longmorn 23 years old
The super premium offering of the new range is one of the oldest expressions of Longmorn to be made commercially available. At the launch event, it was described as “the perfect age for Longmorn” by Trevor Buckley. It is bottled at 48% ABV.

The colour is deep golden yellow and the nose is highly perfumed and inviting. There are plenty of stewed orchard fruit aromas (think of apple and pear) along with fudge, toffee, caramel and a hint of dried tropical fruit (especially mango). On the palate this whisky is incredibly soft and velvety. Initial notes of honeycomb and golden syrup are quickly joined by dried tropical fruits, which are more prominent than on the nose – think of mango again, plus banana and pineapple. Underneath are further notes of raisin, candied orange, milk chocolate and subtle wood spices (imagine cinnamon, nutmeg and a hint of clove). Hints of bittersweet malt and dried grass give additional depth and complexity.


What's the verdict?
These are the first Longmorn expressions that we have ever sampled and we have to say that we are impressed.  It is easy to see why the malt from this distillery is so highly regarded amongst those in the industry and discerning whisky drinkers. The three malts in the this range are of excellent quality and all easy drinking but with plenty of character.

The Distiller's Choice is one of the better entry-level whiskies that we have tasted recently and the re-modelled 16 years old is extremely good - bold, sweet, malty and fruity.  The 23 years old is a sublime whisky that exudes class and lives up to Trevor Buckley's billing as "the perfect age" for his whisky.