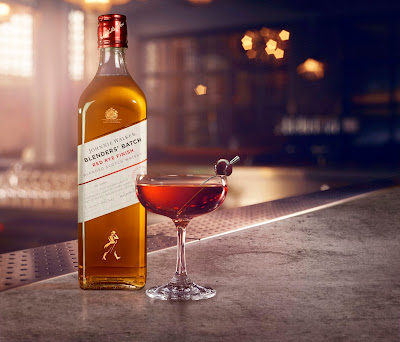 The Johnnie Walker Red Rye Finish is the first part of a new experimental series from the world's biggest selling Scotch whisky brand named The Blenders' Batch.  This first expression features just four whiskies, including single grain from the now closed Port Dundas distillery, and has been matured in first fill ex-bourbon casks and then finished for six months in ex-rye whiskey casks.

The Blenders' Batch will highlight the most successful experimentation that has been taking place over the last decade at Diageo's blending lab at Menstrie in Scotland. The team, led by Master Blender Jim Beveridge, has been working on creating different flavours by manipulating cask type, different grains and distillation processes.  The Red Rye Finish is aimed at bartenders and those not used to using Scotch in cocktails.

"The Red Rye Finish is driven by my own fascination with the bold flavours of American whiskies which first developed while I was working with bourbons and ryes in Kentucky over 25 years ago. It offers the best of Scotch with an exciting twist inspired by the best of traditional American whiskey flavours."
Jim Beveridge.

Our tasting notes
The colour is golden yellow with a distinct amber tint.  The nose is packed with sweet and spicy aromas - think of honey, golden syrup and baking spices (especially cinnamon and all-spice) in particular.  Underneath are further aromas of malty cereals and vanilla, plus hints of stewed apple and slightly burnt brown sugar.

On the palate there is an instant and lovely drying spiciness.  This follows on from the wood/baking spices on the nose and are reminiscent of freshly shaved oak, ground ginger and cinnamon in particular.  Then comes the sweetness - think of golden syrup, brown sugar, toffee and honey - and this creates good balance.  These notes are backed up soft but expressive notes of vanilla and cereals, which give the whisky a creamy/velvety quality once the spices die back a little.  Late notes of dried orange peel and toasted nuts add further depth and complexity.

The finish is full of warming wood and baking spices, especially once the toffee and sugar-like sweetness fades.  The cereals, toasted nuts, oak and cinnamon notes really come to the fore and create a pleasant dryness.  Very nice indeed.

What's the verdict?
The Red Rye Finish is a very promising beginning to the Blenders' Batch experimental series by Johnnie Walker.  It is encouraging to see such a big brand, and other large whisky brands, openly talking about and embracing experimentation in order to attract new consumers.  This is an easy drinking and flavoursome whisky that is great taken neat or incorporated in to a classic cocktail, such as a Manhattan or Old Fashioned.

We have sampled the other two forthcoming expressions in the first batch - the Triple Grain American Oak and the Bourbon Cask & Rye Finish - and will review these upon release.  Having had an insight in to the workings of Diageo's experimentation programme on a recent press trip, it will be very interesting to see where the second round of Blenders' Batch bottlings will take us.

eToro is the ultimate forex trading platform for newbie and pro traders.