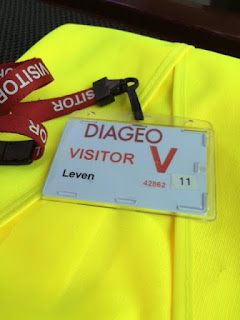 Nestling deep within Diageo's Leven global supply plant is something special and unexpected - the Leven Distillery or PLDA (Process Liquid Development Area) as it is less romantically known.  It is Diageo's least known and smallest whisky making facility, and their 29th that produces single malt.  Leven distillery has quietly been going about its business of innovation and experimentation since production began in 2013.

The Leven complex is the largest spirits bottling plant in Europe and the biggest within the Diageo organisation.  Forty two million nine litre cases of spirit leave the complex each year and include some of the most famous names in their categories - Johnnie Walker whisky, Gordon's gin and Smirnoff vodka.  The scale of the place is incredible, especially as you drive through it.

All of Diageo's single malts, such as Dalwhinnie and Talisker, are also bottled and shipped from there.  Many of the malts, plus single grain from Diageo's Cameronbridge distillery that is just a couple of miles away, are stored in sixteen massive warehouses on the site prior to bottling or use.  Over 1,200 people are employed making Leven more like a small town than a large factory.

The Leven Distillery can produce both single malt and single grain whisky.  It can be switched to follow the procedures to make either and then every aspect of the production process - milling, mashing, fermentation, distillation and casking - can be tweaked to recreate or develop a plethora of styles.  It is one of the key facilities within the Diageo innovation and experimentation programme.

However the distillery is not just used to create new flavours or working practices.  It is also where production techniques at Diageo's 28 other single malt distilleries can be re-evaluated, tested, made more efficient or any current issues analysed.


Malted barley arrives at Leven and is then ground to create grist in one of two mills.  They are equipped with a traditional two roller mill as used in most single malt distilleries, but also a hammer mill that is more commonly used in brewing or grain whisky production.

The grist, which can be milled to different ratios, is then passed to a mashing vessel - this can hold half a tonne of grist and has an insulating jacket to allow manipulation of temperature, plus different water temperature steps to draw the maximum amount of soluble sugars and enzymes from the cereals.


There are four fermentation washbacks that each hold 2,500 litres of wort.  These are equipped with 'dimple jackets' and these allow the distillers to control the temperature and rate of fermentation, which will give different flavours.  They also experiment with different yeast strains and fermentation times.  The resulting wash is around 8-9% ABV, although some higher strength experiments have been completed.

The two stills were made by Abercrombie's in Alloa and are quarter sized replicas of the stills at Royal Lochnagar distillery in the Highlands.  There is one wash still and one spirit still with each having a 1,000 litre capacity.  They are named Isabel and Grace after Distillery Manager Richard Cowley's children.  If operated as a full distillery, Leven's annual production would be around 250,000 litres.


The distillers can manipulate flavours of the final spirit in a number of ways at Leven.  This includes the rate of condensation and cooling of the spirit, the fill level within the still and the pressure that each still is operated at.  Another feature is a series of interchangeable heads (the section between the pot and lyne arm) that recreate the different styles of spirit from within Diageo's portfolio.  These are different shapes and are modelled on the still shapes of Dailuaine in Speyside, Lagavulin on Islay and Teaninich in the Highlands.


Each experiment is run through the entire distillery system for approximately one month and takes a further three months of pre-planning to ensure maximum results are achieved. The facility is designed to make sure that Diageo are at the very forefront of experimention in the whisky industry, both to develop new products and improve current working practices.

We would like to thank Diageo for allowing us to visit Leven and for the hospitality and knowledge shared by the distillery's workforce - Ewan, Hayley, Richard and Robin.  The visit offered a fascinating insight in to what goes on behind the scenes in a large organisation and beyond the view of the view of consumer eyes and awareness.

posted by Whisky For Everyone at 8:28 PM