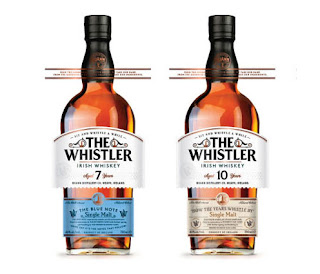 The Whistler is a new range of Irish single malt whiskeys from the independent distillery of Boann. The distillery itself is nearing completion and not yet in production, but this stock has been purchased from the Cooley distillery under agreement.  This has then been aged for the last two years by the Cooney family, the owners of Boann.  In addition to the two whiskeys reviewed here, there will also be 5 years old and 10 years old Cask Strength bottlings.

The Boann distillery is a new venture and is located in the Boyne Valley, close to the town of Drogheda in Ireland. The distillery is housed in a former car showroom and is named after the legendary Celtic goddess Boann, who is said to have lived in the valley. Production is hoped to begin by the end of 2016 and the capacity will be an estimated 200,000 litres per year. There is also a 500 litre capacity gin still that has been installed next to the whiskey stills.


Boann forms part of the Cooney family's Na Cuana group – this includes the Boyne Brewhouse, which is on the same site as the distillery and produces a range of craft beers, the Adams Cider Company, which produces cider using apples from the family's own orchards, and Robert A. Merry & Co. Ltd, producers of a range of Irish cream liqueurs.

The Whistler 7 years old, nicknamed 'The Blue Note', has seen five years of maturation in ex-bourbon casks before the Cooneys transferred it to ex-Oloroso sherry casks for the final two years.  Similarly, The Whistler 10 years old has eight years in ex-bourbon casks and then a further two years in ex-Oloroso sherry casks.  Both are bottled at 46% ABV and are non chill-filtered and of natural colour.

The Whistler 7 years old
The colour is golden yellow and the nose is full of malted cereal and caramel aromas initially.  Underneath are further aromas of burnt sugar, almonds, golden syrup and hints of candied orange peel, milky coffee and dried tropical fruit.

On the palate this whiskey shows an immediate sweetness that is tempered by a distinct woody spiciness.  The sweetness manifests itself as notes of caramel, butterscotch and golden syrup with a background hint of black treacle.  The wood spices are led by notes of cinnamon, clove and all-spice.  The malted cereal and fruit characteristics are more muted than on the nose but have hints of dried tropical fruits (pineapple and mango especially), stewed apple and bitter orange oil.  Late hints of milk chocolate and marzipan round things off.

The Whistler 10 years old
The colour is golden yellow and the nose has plenty of dark dried fruit aromas - think of raisins, sultanas, figs and candied oranges.  Supporting these are further aromas of caramel, almonds and malty barley. A background whiff of something earthy and savoury adds even more interest.

On the palate this whiskey presents a lovely initial mix of fruity, sweet and savoury notes.  It feels soft and gentle.  The dark dried fruits from the nose (raisin and orange in particular) are backed up by a hint of dried tropical fruits (mango especially).  The sweetness is reminiscent of a combination of golden syrup, butterscotch and honey.  The savoury aspect has elements of malted barley and this seems to gain more influence and become quite earthy with time.  There are also notes of ginger, cinnamon and hints of black treacle and something meaty, almost leathery.

What's the verdict?
Both of The Whistlers are lovely whiskeys and very easy drinking.  The 10 years old is softer and fruitier, while the 7 years old is sweeter with heavier wood spices.  It will be interesting to see how they go in the market place.

It will also be interesting to see what else happens with Boann once production starts and what their house style of spirit may be.  We have a few years to wait to see an actual Boann whiskey in a bottle but it should be worth that wait.