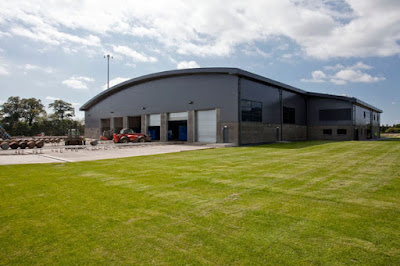 Cambus is a cooperage that rebuilds and regenerates whisky casks for the portfolio of Diageo's single grain and single malt distilleries in Scotland.  The cooperage, which is one of the most modern such facilities in the world, is built on the site of the old Cambus single grain distillery from which it takes its name.  The Cambus distillery was demolished in 1993 and the cooperage opened in 2011.

The cooperage sits within Diageo's massive Blackgrange complex.  This is a warehouse facility of simply massive proportions, the scale of which cannot be fully comprehended until you drive through it to get to Cambus.  Blackgrange has nine miles of roadway connecting over 50 racked warehouses.  These hold a staggering four million casks of whisky - that's approximately one fifth of all of the Scotch maturing in the world. 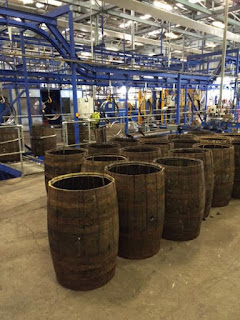 
As you walk in to Cambus, the smell of wood sits in the atmosphere.  The air is filled with the rumble of machinery and the tap-tap of cooper's tools.  The work force is of an impressive size - 18 coopers are present per shift and there are three shifts per day.  There is also a high volume filling store on site, which has four workers filling the completed casks with whisky.

Within Cambus a series of modern and revolutionary techniques are employed.  These have been developed to extend the life of both the casks and the coopers themselves.  These also have the effect of increasing output of casks through the system and means that Cambus is estimated to deal with 360,000 casks in 2016.  This is 30,000 casks per month and double the amount of Diageo's previous cooperage facility.

Casks undergo two main processes within the cooperage - rebuilding and rejuvenating.  Rebuilding sees casks that are not suitable for re-filling with whisky taken apart and damaged staves or heads replaced.  Rejuvenated casks are suitable for re-filling but tired from previously maturing whisky.  The inside surface of these is shaved away and then re-charred with high pressure flame to reinvigorate the wood.  A cask can take up to three 'rejuvenations' and this doubles its working life. 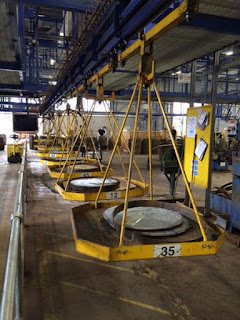 
Each process has a separate production line that sees a damaged or pre-rejuvenated cask start at one end and a completed cask come off at the other.  Sensors match each part of the same cask together and monitor their progress down the line so that parts never go astray.  Rebuilding normally takes place in the morning and rejuvenating in the afternoon and evening.

While much of the process is now mechanised and designed to ease the repetitive strain on the cooper's body, the cooper's still need the traditional skills.  This is why Diageo have a cooper's academy at the site, which is supported by a UK Government incentive, and there are currently 10 apprentices at various sages of development. 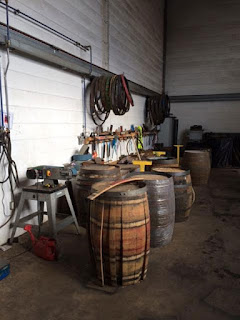 
The apprenticeship programme lasts for four years and numerous former or retired coopers are employed as tutors.  Participants learn the traditional hands on core skills of coopering in the first three years, before moving on to the Cambus cooperage floor for their final year.

The continual experimentation to get more from the wood and the casks is backed up by an archive of technical reports that have been created by Diageo.  This includes data on the best depth to shave the casks, the ratio of wood to whisky and the level of charring amongst many other things.

"Experimentation is key.  It is how we develop new products and new flavours.  At Cambus, the traditional meets the modern and helps us to achieve this."
Dr. Matthew Crow - Head of Wood Science, Diageo Blending Team.


Probably the most well known successful experiments are the Johnnie Walker Double Black and the Talisker Port Ruighe, both of which were developed using data compiled by the combined team of whisky makers, blenders and coopers.  The latest is the Johnnie Walker Red Rye Finish, which has just been launched worldwide. 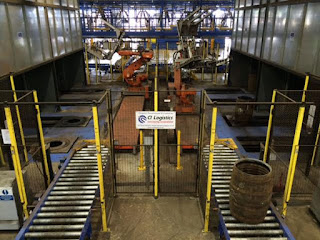 A cask waits to be re-charred.


The visit to Cambus was eye-opening and gave a glimpse in to the world of the modern cooper.  It also gave an insight into the scale of the operation that Diageo has there and the level of control they can agin and the level of consistency that they can predict for the final spirit that will be filled in to the cask.  The traditional copper skills have not been lost, which is encouraging, but simply honed for a contemporary age.


posted by Whisky For Everyone at 6:41 AM