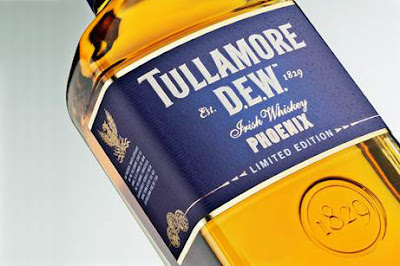 The Phoenix is a new cask strength whiskey that is a blend of pot still, single malt and grain whiskeys.  It has a high percentage of ex-sherry cask maturation within the blend and this has then seen a finishing period in virgin American oak casks. The Phoenix was launched during the Summer to celebrate the second anniversary of the new distillery at Tullamore, which began production in August 2014.

The name refers to the phoenix that adorns Tullamore's coat of arms. This dates back to an incident in 1785 when the town in County Offaly was destroyed by fire.  However, the town rose from the ashes like a phoenix and was fully rebuilt.  Tullamore DEW was originally distilled in the town in 1829. Tullamore is the anglicised version of Tullach Mohr, meaning 'great mound' in Gaelic.

The Tullamore distillery was founded by Michael Molloy before passing to Daniel E. Williams in the 1880s. Williams worked at the distillery as a teenager in the 1860s and made his way up to the position of General Manager. Williams made Tullamore one of the most modern whiskey making facilities at the time.

He also gave his name to his whiskey by combining the town's name with his own initials, hence Tullamore DEW.  The distillery closed in 1954 and fell into disrepair, before current owners William Grant & Sons, the current owners built a new distillery on a 57 acre site in the brand's spiritual hometown.


The Tullamore DEW Phoenix is bottled at 55% ABV and is available in specialist whisky retailers. The recommended retail price is £54.95 per bottle.

Our tasting notes
The colour is golden yellow and the nose has a lovely mix of aromas including butterscotch, baked apples and ginger.  Underneath are further aromas of brown sugar, dried tropical fruit (especially pineapple) and punchy baking spices - think of cinnamon in particular.

On the palate this whiskey feel quite potent because of the high alcohol strength.  That said, it feels well balanced because of this and causes the flavour profiles to be somewhat exaggerated.  There is an immediate warming and woody spiciness - think of cinnamon, all-spice, clove and earthy gingerbread.  These notes are supported and complimented by a delicious sweetness that is most reminiscent of butterscotch, toffee and fudge.  Then come the baked apple and tropical notes from the nose plus hints of marzipan, raisin and toasted almond.

The finish is warming and long with the earthy wood spices prominent.  The sweetness and fruitiness lingers well but as these fade the spiciness comes to the fore.  The cinnamon, ginger and almond notes are particularly formidable.

What's the verdict?
The Tullamore DEW Phoenix is an excellent whiskey and offers good value for the money.  The intensity and exaggerated spice created by the cask strength ABV is balanced well by the sweet and fruity elements.  This intensity is softened with the addition of water but it still remains balanced, which is the sign of a good whiskey.  A very nice example of an Irish blend and well worth searching out.