The Quiet Man is an Irish whiskey brand that is owned by Niche Drinks.  The brand is named after the father of Managing Director Ciaran Mulgrew, who was a well known bartender in Ireland for over 50 years but a man of few words. His name was John Mulgrew and he was known as 'The Quiet Man'. This translates as An Fear Ciuin in to Irish Gaelic and this also features on the logo.  The current whiskeys in the range are sourced from a third party and matured by Niche Drinks, who are best known for their range of Irish cream liqueurs.

However, plans are progressing for a new distillery in Derry to produce liquid directly for the brand and these have been recently approved by the local authorities.  The distillery marks Niche Drinks first foray in to distilling and will see four buildings on Ebrington Square converted at a cost of £12 million.  Production is scheduled to begin in early 2018 and will see 500,000 litres of single malt whiskey produced each year.

The Quiet Man whiskeys are now distributed in over 20 countries across the world and are available through selected specialist whiskey retailers. The range continues to grow - the 12 years old single malt has very recently joined the traditional blend and 8 years old single malt - with more expressions planned for imminent release. We were lucky to sample the three whiskeys in the core range recently. 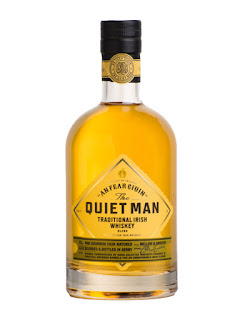 The Quiet Man Blend
This traditional Irish blend is made up of single grain and single malt whiskeys, which have been matured in ex-bourbon casks.   The whiskey is bottled at 40% ABV and retails for £35.

The colour is pale gold and the nose is light delicate and fresh. There are initial aromas of honey and vanilla with a hint of toffee.  This is backed up by malty cereals, white chocolate, cinnamon spice and green apple, plus whiffs of earthy ginger and dried hay.

On the palate this whiskey is again light and fresh with an instant and defined sweetness - this is reminiscent of honey, fudge and icing sugar.  Then come notes of vanilla, delicate baking spices (think of the cinnamon and ginger from the nose, plus clove and mace), white chocolate and a hint of white pepper. A pleasant fruitiness is also present and has a feel of green apple and candied lemon.  Late notes of dried mango and hay add depth.  The finish is short and crisp - the sweetness fades rapidly to leave the warmer, drier and maltier characteristics to linger. 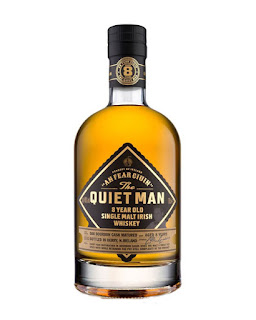 The Quiet Man 8 years old
This is an Irish single malt from an undisclosed distillery that has been matured and bottled by Niche Drinks.  It is bottled at 40% ABV and has been matured in ex-bourbon casks and finished in fresh ex-bourbon barrels.  The retail price is £45.

The whiskey is golden yellow in colour and the nose is lovely and expressive. There are initial aromas of vanilla, honey and tropical fruits (think of mango, pineapple and peach especially), along with hints of green apple and gingerbread.

On the palate the whiskey feels very soft and sweet with a hint of gentle and warming baking spice. There are a lovely combination of notes - think of honey, vanilla, golden syrup, crisp green apple, candied lemon peel, dried mango and cinnamon. Underneath are hints of malted barley, gingerbread, dried pineapple, over ripe banana, peach and a pinch of clove. It is very good and well balanced. The finish is long and warming. The sweet and fruity elements slowly fade to leave the warming wood spices and bittersweet malty notes to remain and fight for attention.


The Quiet Man 12 years old
This is an Irish single malt from an undisclosed distillery. This has been matured in ex-bourbon casks sourced from Kentucky and is bottled at 46% ABV and is no chill-filtered. The retail price is £55.

The colour is pale straw yellow and the nose is light, delicate and fresh. There are aromas of honeysuckle, vanilla and green apple mixed with pear, honey and apricot. Underneath are hints of milk chocolate, cinnamon and white pepper.

On the palate this whiskey feels delicate and light despite the higher ABV strength. There is a lovely combination of subtle notes and defined sweetness.  First come notes of honey and vanilla but these are quickly joined by sweet over ripe tropical fruits - think of peach, mango, pineapple and lychee. Then follows something savoury such as cinnamon, ginger and walnut. Hints of milky coffee, malty cereals and a crack of pepper add further depth.  The finish is wonderfully warming with the earthy and savoury notes stciking to the taste buds.

Thanks for taking the time to review The Quiet Man whiskies - I appreciate it.
Ciaran

Thanks for taking the time to review The Quiet Man whiskies - I appreciate it.
Ciaran