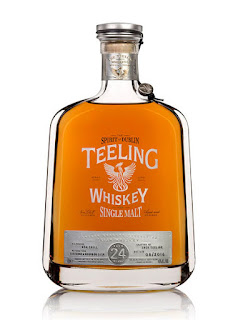 This whiskey is the latest bottling in the Vintage Reserve Collection from the Teeling Whiskey Company, the leading independent Irish distiller.  The malt used to create this 24 years old expression was distilled in 1991 and has been matured in ex-bourbon casks.  It was then transferred to and finished in ex-Sauternes dessert wine casks. The whiskey is unusual as it also contains a small portion of peated malt, which is a relative rarity within the Irish whiskey genre. The Teeling Whiskey Company was founded by Irish whiskey pioneer Jack Teeling in 2012 and has won multiple awards ever since.

The Teeling family had previously helped to rejuvenate the Irish whiskey industry by setting up the Cooley distillery in County Louth in 1987. The aim was to bring back many of the old traditional Irish whiskey brands that had been lost over time - these included Connemara, Kilbeggan and Tyrconnell. Cooley was sold to Beam Global in January 2012, which left Jack free to set up Teeling Whiskey Co.  Since, they have built a new distillery in the centre of Dublin and this began production in mid-2015.

"This offering is central to our goal to help drive diversity in Irish whiskey by introducing interesting and unique small batch bottlings. There is nothing else like this Irish single malt on the market and it represents a rare piece of Irish whiskey history in each bottle."
Jack Teeling - Founder of The Teeling Whiskey Co.


The Teeling 24 years old is bottled at 46% ABV, is non chill-filtered and there are just 5,000 bottles available.  These are on sale in selected world markets via specialist whisky retailers and the recommended retail price is €300 (£265) for a 70cl bottle.

Our tasting notes
The colour is deep golden yellow and the nose has a wonderful mix of aromas - to begin with there is distinct golden syrup, robust malty cereals and background dried tropical fruit (think of mango, peach and pineapple especially).  Then further aromas develop - imagine honey, vanilla, sultanas, candied lime and a savoury earthiness.  It feels very intriguing.

On the palate this whiskey is incredibly soft and extremely sweet and fruity from the start.  The sweetness is a combination of honey and golden syrup, which develops in to something reminiscent of maple syrup with time.  The fruitiness is more intense than on the nose but follows a similar profile of dried tropical and candied citrus.

There are plenty of mango and peach notes, which mingle with juicy sultanas and candied lemon and lime.  All of this is underpinned and balanced by a robust and savoury earthiness - this shows itself as notes of bittersweet malted cereals, gingerbread, soft delicate peat smoke, dried grass and hints of warming spices such as cinnamon and white pepper.

The finish is long and expressive with the earthy, wood spice and savoury characteristics lingering longest. The sweeter and intensely fruity notes begin to fade after a considerable time to leave these pleasant, warming and bittersweet elements to hold on.

What's the verdict?
The Teeling 24 years old is a lovely Irish single malt and one that feels like a privilege to sample.  There are not many Irish whiskeys of this age out on the market and we have not tasted many.

We also have not tasted many Irish whiskeys that have such a savoury profile - the combination between these savoury characteristics and the sweet and fruity ones is intriguing, delicious and complex.  This is very good and shows what we can look forward to as more Irish whiskey reach this sort of age in the future.