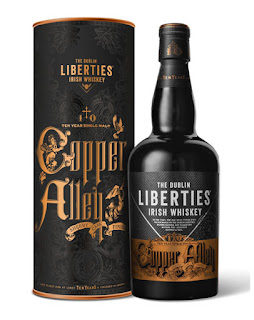 Copper Alley is an Irish single malt whiskey released by The Dublin Liberties.  It was launched in September 2016 and is the company's second whiskey in their fledgling range, following 2015's Oak Devil expression.  The Copper Alley is named after one of the oldest streets in Dublin, which is located within the historic distilling district.  The whiskey used is single malt from an undisclosed Irish distillery and has been matured in ex-bourbon casks for 10 years before being finished in 30 years old Oloroso sherry casks for six months.  Only 31 such casks were used for finishing for this limited edition.

The Dublin Liberties is owned by Quintessential Brands, which was founded in 2011.  Work has recently begun on building a distillery with visitor centre for the company in central Dublin and this will produce whiskey for The Dublin Liberties and The Dubliner brands within their portfolio.  The €15 million renovation of an 300 year old mill and tannery will combine traditional Irish whiskey making practices with modern technology.  Production is scheduled to begin in late Spring 2018.

The Dublin Liberties Copper Alley is available in selected premium whiskey retailers in selected countries and is bottled at 46% ABV.  It is non chill-filtered and the recommended retail price is £65 per bottle.

Our tasting notes
The colour is golden yellow and the nose has a lovely mix of sweet and fruity aromas.  The sweetness is driven by aromas of honey and golden syrup with a hint of toffee, while the fruit has a tropical edge to it (think of pineapple, lychee and mango) plus some background green apple and plum.  Further aromas of vanilla, cinnamon and orange peel also come through.

On the palate there is an instant hit of white pepper and cinnamon.  However this calms downs quickly and the whiskey becomes softer in the mouth.  Sweet notes of honey, vanilla and golden syrup (or is it more like maple syrup now?) mingle well with these initial spices.  Also present are a delicious mix of juicy dried fruit characteristics - imagine sultanas, raisins, pineapple, apricot and mango with a hint of cherry.  They are joined by more subtle notes of milk chocolate, toasted almonds and malted barley, plus earthy and warming wood spices including cinnamon and ginger.

The finish is of decent length and becomes increasingly dry, woody and spicy.  This is especially true once the expressive fruity notes and the sweeter elements begin to fade.  The tropical fruit lingers particularly well, complimenting the wood and earthy spices.

What's the verdict?
The Copper Alley is a lovely whiskey that mixes plenty of sweet, fruity and spicy elements together in a balanced and enjoyable way.  We have not sampled the Oak Devil, their first release, so do not know how it differs but this newer whiskey is very promising.

It demonstrates just how many good new Irish products there are now on the market and it will be interesting to see what The Dublin Liberties release next and what the spirit they produce at their new distillery will be like.  On this eveidence, it will be good.