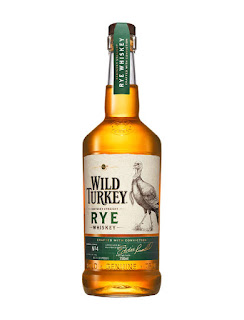 This rye whiskey was first released in 2015 and is bottled at 81 Proof (proof is the old American system of measuring alcohol strength and equates to 40.5% ABV).  It joined the popular Wild Turkey whiskey range - this includes the 81 Proof bourbon, 101 Proof bourbon and a stronger version of the rye, called 101 Proof Rye.  The mash bill for this whiskey is 51% rye, 37% corn and 12% barley, and it has been matured in American white oak casks.  The Wild Turkey Rye is available through specialist whisky retailers in the UK and Europe, but is widely available throughout the USA. A bottle should cost between around £30 each.

The Wild Turkey distillery is in the town of Lawrenceburg in the famous whiskey making state of Kentucky. It was founded by the Ripy family in 1869 and there are a couple of stories regarding the name - one is because it was built on Wild Turkey Hill and the other regards a story about a former employee. He used to go on an annual turkey hunt with and took whiskey from the distillery with him. In the following year they asked him to bring more of "that wild turkey whiskey" and soon after the Wild Turkey brand was introduced.

The brand was one of the most popular bourbon brands before Prohibition, but the distillery was forced to close during that period.  However, it was one of the first to reopen after Prohibition and this helped to re-establish Wild Turkey as a leading American whiskey brand.  It is currently owned by Gruppo Campari, who took control in 2009.

Our tasting notes
The colour is a deep golden yellow and the nose has a lovely mixture of sweet and spicy aromas - think of vanilla, honey and earthy baking spices in particular, especially cinnamon. Despite these, the impression is of freshness and vibrancy. This is accentuated by delicious additional aromas of maraschino cherry and candied orange peel.

On the palate this whiskey has a softness that is not always present with ryes. Most have pronounced spiciness and bittersweet notes.  This whiskey has these but they are more subtle and toned down - imagine delicate cinnamon, white oak and bitter cereals, plus hints of menthol and cocoa powder. These notes are complimented by well balanced sweet and fruity notes. These are most reminiscent of the vanilla, honey, cherry and orange characteristics from the nose, along with a hints of golden syrup and milk chocolate.

The finish sees a more pronounced spiciness and dryness than on the nose or palate and these are the elements that linger longest.  This gives an increasing warmth in the mouth, which is very pleasant, especially once the sweet honey, vanilla and fruity notes have faded.

What's the verdict?
The Wild Turkey Rye is a lovely whiskey and one that shows the subtler side of rye whiskeys. The lovely balance between the sweet, fruity and warming spice notes is very good and makes this an enjoyable and easy-drinking whiskey.  It works very well when taken neat, but also works superbly when used in classic American whiskey cocktails such as the Manhattan and Old Fashioned. The whiskey is also good value at just £30 a bottle and one of the better ryes to come out from the big brands.

I've tried some Wild Turkey products, and will try the rest. With the help of one of their brand ambassadors I'm writing an article on their full line: Wild Turkey 81 and 101, Russel's Rye, Rare Breed, Russel's Reserve, Kentucky Spirit. Will eventually add their new product, Longbranch.

Everest Base Camp Trek is one of those journeys that create your vacation dreams return true. Hiking on the legendary foothills just under the mighty Mount Everest 8848m with exciting views of the master peaks will solely be found within the Everest Region. This celebrated trek is thought worldwide for its trailblazing routes & the landscapes speak to your senses. On this trip you furthermore Mera peak out at the celebrated Kala Patthar (5,600m/18,373ft) read purpose for a few grand direct views of the very best mountain in the world. Everest Base CampTrek additionally includes different celebrated eight thousand peaks like Mt mountain peak (8,516m /27,940ft), Makalu (8,485m /27,838 ft) Cho-Oyu (8,201m /26,906ft). The culture of this specific space is of nice notebook stuff & interacting with the native of us puts a lot of zest into your venturesome journey as you walk through the Khumbu region of the Asian country. This legendary path could be a psychological thriller for top & wild hikers World Health Organization want the tread the methods wherever legends walked before on their thanks to conquering mountain peak, some did some didn’t however the Everest Base Camp Trek path keeps those legends alive for many trekkers World Health Organization head to the present region. The trip begins with a stirring mountain flight to Lukla, one among the world’s highest mountains; & as shortly as you set down at that altitude, the remainder is history. Your hike takes you to the favored village city of Namche, referred to as the ‘gateway to the Khumbu’’ & from there on you rehearse quiet monasteries with the acknowledge Sherpa of us World Health Organization inhabit this region & their culture is price noting. On the way, we have a tendency to visit the Sagarmatha parkland, home to some rare fauna & flora, this additionally wherever we have a tendency to adapt for a few time. We head deep into the Khumbu hiking into the forest of shrub, birch trees & pine, with colorful villages wherever we have a tendency to square measure sincerely welcome by the Sherpa community. we have a tendency to square measure pleasantly stunned to return across a hospital-based mostly in Khunde and health post at Pheriche that shows this region not solely cares for the locals however also are able to look out of trekkers World Health Organization have altitude issues. Doctors square measure invariably at the post for aid treatment. The Everest Base Camp Trek is arduous however varied teahouses square measure found on the paths providing smart grubbed to shelter from the generally harsh climate. Our trek culminates at base camp so we have a tendency to create a path for Namche as we have a tendency to hike back to Lukla to rendezvous for our flight to Katmandu. we have a tendency to add an additional contingency day for inclement weather which will delay flights. It’s recommended to be pretty acceptable to undertake this journey; you only want some smart hiking exercise before doing this trip. And Nepal Base Camp Treks can do the remainder to allow you AN action-packed odyssey of a period.

Annapurna Base Camp Trek assortment may be a known steady trekking route of seven days in Annapurna range region of Asian nation. Annapurna Base Camp trekking that additionally called Annapurna Sanctuary trekking is that the greatest distinguished trekking in Asian nation. the foremost peaks of western portion of large Annapurna Himal includes Hiunchuli, Annapurna south, Fang, Annapurna, Gangapurna, Annapurna three and Machhapuchchhre that ar organized in such a fashion that they exactly type a bend that have a diameter of virtually ten miles. Annapurna base camp trek of seven days from Kathmandu to Pokhara provides the nice influence of existence of a giant area within the core Modi Khola mark its resolution within the south of this ice mass vale in slender gorge of twelve,000ft deep. when you pass what is more to the south this gorge end up to be even wider and provides rise to the productive vale wherever Gurung folks live. Trekking in Asian nation Annapurna Base Camp higher and middle half Moody Khola offers trekkers some short cut trekking ways. Annapurna base camp trekking of seven days package begin its morning flight from Kathmandu to Pokhara and therefore the terribly day it goes on to Nayapul with personal vehicles and trek extend to Natural hot reserving in Jhinu danda, from wherever begins the Annapurna base camp or Annapurna Sanctuary Trek of the Asian nation Himalaya.