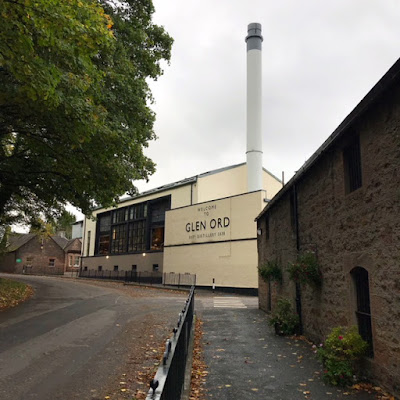 The Glen Ord distillery is located on the edge of the north Highland village of Muir of Ord. On a bleak October afternoon, and with a couple of spare hours to hand, I decided to take the short but scenic train ride from Inverness. The visit was one of nostalgia. Much like the trip to Glenmorangie earlier in the year, Glen Ord was one of the first distilleries that we visited on our fledgling whisky journey.

Once out of Inverness, the train line hugs the coastline of the Beauly Firth and criss-crosses the road in what seems like a competition between road and rail to get the best view. The tide was low and through the gloom an abundance of sea birds and waders were visible on the mud.

Disembarking at Muir of Ord station, which sits at the western end of the Black Isle, makes you wonder how such a place maintains a rail link when larger towns have lost theirs. The answer is that it sits on the spectacular North Highland Line, which runs all the way up to Thurso and Wick in the far north and forms a lifeline to remote communities in the north east of Scotland.

As we had visited over ten years ago, memories of the distillery itself were faint. The brisk walk from the station, which took about ten minutes or so, was peaceful and far removed from the hectic nature and noise of London that I had left that morning. A turning in the road reveals the first signs that you are getting close as the huge building of the adjoining malting facility looms in the distance between the trees.


The Glen Ord Maltings, like the distillery, are owned by Diageo. They use the facility to produce malted barley for their Clynelish, Glen Ord, Talisker and Teaninich single malt distilleries. The majority of the barley used is farmed on the Black Isle and most is malted in a non-peated style. Some is slightly peated and some heavily peated.

For the first time for ages, I joined a regular tour rather than one organised for a press trip. Having just missed the previous tour, there was time to kill. My £8 was paid and I then proceeded to the small exhibition within the visitor centre. Plenty of historical memorabilia was on offer and a few facts were absorbed - the distillery was founded in 1838, has the motto 'I Shine, Not Burn' and takes its water from two sources (the nearby lochs of Nam Bonnach and Nan Eun).


Glen Ord is marketed as The Home Of The Singleton, a single malt brand that covers three Diageo distilleries (the Speysiders of Dufftown and Glendullen being the other two), and you are reminded of this throughout the tour. As with most Diageo distilleries and regular tours, no photography was allowed within any production area due to health and safety.

The distillery has been expanded significantly since our first visit and now has a production capacity of just over 11 million litres per year. As it turns out, the tour takes you around the old (and clearly more attractive and tourist friendly) part of the facilities. The rest is hidden away in a creative mix of new and old distillery buildings. Fermentation washbacks are even housed in the former kiln for example.

Our guide, Lauren, was very good and explained all aspects of the production process well and this began with how barley is malted. This was particularly important given the close proximity of the Glen Ord maltings next door and was brought to life with the opportunity to smell and feel the barley, malted barley and grist used at the distillery. Then we were quickly shown the old Porteus Mill that produces the grist.

Each mash at Glen Ord uses 12.5 tonnes of grist and takes six and a half hours to complete. They use three waters with the temperature increasing each time and pulling more soluble sugar from the grist. The first water has a temperature of 63.5°C with the last going in at 80°C. The resulting wort is then cooled down to 17°C in readiness for the fermentation.

The fermentation washbacks are wooden and made of Oregon pine. Each holds 59,000 litres of wort, which is the result of one mash. The yeast is added and then left for 75 hours. This relatively long fermentation time, plus the use of wooden washbacks, is attributed to giving the final Glen Ord new make spirit its increased fruity character.

Glen Ord has two still houses - we were shown around the old one, which is home to three pairs of stills. The new extension, which is across a courtyard, houses four further pairs of stills. Both sites make the same spirit and these are then combined for consistency.

The three pairs of stills (3x wash and 3x spirit stills) in the older still house have warm water condensers - this means that the alcohol vapour is slower to re-condense back to a liquid than with cold water condensers. This in turn increases the copper contact, which purifies the spirit further.


There are five warehouses on site and within these approximately 12,000 casks of single malt are maturing. Most is Glen Ord, but there are also casks from other Diageo distilleries present. The remainder is matured at Diageo's specialised facilities at Blackgrange and Leven.

The tour was completed with a tasting of the Singleton of Glen Ord 12 years back at the visitor centre - this is a lovely single malt if you have not tried it and is soft, gentle and sweet with plenty of green apple and pear notes and a toffee-like sweetness. I also managed to get an additional taste of the Artisan, a distillery exclusive of the Singleton of Glen Ord that has been matured in ex-bourbon casks and then finished in ex-Pedro Ximenez sherry butts. This was much richer and heavier with plenty of  dried and stewed fruits, caramel and earthy spices.


Walking back to the train station, I naturally reflected on the tour experience. It was basic but informative and everyone seemed to enjoy it. It also felt nice to just be a regular visitor, rather than on a press trip, and see a distillery how most people see and visit them. If anything the final tasting part was slightly rushed and a little stingy, but it was the only negative. Glen Ord is well worth a visit if you are in the area.