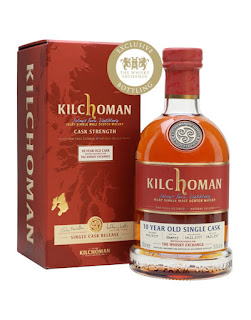 This new single cask bottling from the small independent Islay distillery of Kilchoman is the third to be released by leading retailer The Whisky Exchange. The cask in question is Cask #401, which was a first-fill ex-Oloroso sherry butt and has yielded just 599 bottles. It was selected by a team from The Whisky Exchange and it was filled with new spirit on 14 November 2007. Bottling took place just over 10 years later on 24 November 2017 and it is one of the oldest Kilchoman's to have been released to date.The single cask is bottled at the natural cask strength of 58.5% ABV and is of natural colour and non chill-filtered. Each will cost £125.

Kilchoman is one of Scotland's youngest and smallest whisky distilleries and is located on the famous whisky island of Islay. It is named after the local church parish and is new in whisky terms - the first spirit was produced in June 2005 and the first single malt was released in November 2009. Kilchoman is independently owned by the Kilchoman Distillery Company and has a production capacity of 100,000 litres a year. It has built up a healthy following of whisky drinkers and attracts over 10,000 people a year to its visitor centre.

Our tasting notes
The colour is a deep golden yellow with a hint of amber and the nose is bursting with expressive aromas - think of damp earth and moss, caramel and butterscotch. Then come further aromas of golden syrup, dried fruits, candied orange, heather honey and an increasingly influential floral soft peat smoke.

On the palate this whisky has an immediate peppery and spice-like quality, which is reminiscent of cracked pepper and red chilli. The floral and earthy smoke from the nose seems even more prominent and has a burnt cookie/oatcake quality to it. This is backed up by delicious notes of caramel, gingerbread, juicy dried fruits (especially raisins and sultanas) and candied citrus peel (orange and lime in particular). Further depth and complexity is added by a pinch of salt, plus hints of liquorice, mint, cinnamon and menthol.

With water the whisky softens, especially the peat smoke element, and the sweeter and fruitier notes are heightened. It holds together even with a lot of water and is arguably better with some added. The finish is long with the peat smoke, and an associated slight bitterness, lingering longest. A late hit of salted caramel rounds everything off.

What's the verdict?
This Kilchoman is superb and continues the high quality of The Whisky Exchange's exclusive releases. The combination of the ex-sherry cask, Kilchoman's peated spirit and the age of maturation is excellent and balanced. It shows how well the Islay distillery's whiskies are developing with increased time in the cask and the future is looking very good. A sublime whisky that sets the standards for 2018 very early.