Chivas Regal
The super premium Scotch blended brand of Chivas Regal have announced their most exclusive bottling to date - The Icon 50 years old. The bottling celebrates the brand's recent crowning as the new official spirits partner for Manchester United Football Club and the 50th anniversary of the club's 4-1 win in the European Cup final against Benfica. Only four bottles will be available - one for each goal scored by Manchester United in that final - and these have been created by Sandy Hyslop, the Director of Blending for Chivas Regal.

Each will be presented in a hand blown crystal decanter made by Dartington Crystal. One bottle will be gifted to a Manchester United supporter via the club's social media channels, one will be presented to the club's football museum before being auctioned at an end of season event and one will go on display at the Strathisla distillery in Speyside. The fourth bottle will be auctioned online by Sotherby's between November 23 and 30. All proceeds from both auctions will go to the Manchester United Foundation.

"Ever since Chivas’ founding brothers, James and John, first perfected the art of blending, Chivas has never released a whisky more than 30 years old – this limited edition 50 years old blend is an iconic piece of history. It features our oldest, most luxurious and rarest whiskies, some from now lost distilleries."
Sandy Hyslop. 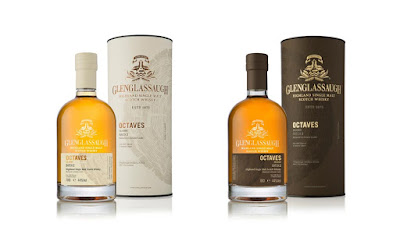 The east Highland distillery of Glenglassaugh has announced two new single malts to continue their Octaves range. One is in the classic coastal Glenglassaugh style and one is peated, which they only produce for a short time each year. This is the second batch of Octaves, which are small bespoke casks of 65 litres made to the distillery's exact specification - regular casks are broken down and then rebuilt and come.

The Octaves have been hand selected and married together by Rachel Barrie, the Master Blender for the brand. Octaves Classic is a combination of ex-bourbon, ex-Oloroso and ex-Amontillado sherry octave casks. Octaves Peated is a combination of ex-bourbon, ex-Port and ex-Oloroso sherry octave casks. Both are bottled at 44% ABV, are non chill-filtered and of natural colour. They will be available in selected specialist retailers worldwide with Octaves Classic Batch 2 costing £60 and Octaves Peated Batch 2 costing £65. The popular single malt brand of Glenmorangie is celebrating its 175th anniversary by reintroducing native oysters to the Dornoch Firth, which the north Highland distillery overlooks. The initiative, which is named DEEP (Dornoch Environmental Enhancement Project) and created in conjunction with Heriot-Watt university in Edinburgh and the Marine Conservation Society, was started in 2014 and saw 300 oysters introduced to the area two years ago.

In this time they have thrived, allowing the next phase of the project to take place. This will see a total of 20,000 oysters, all bred in the UK, introduced to man-made reefs in the Dornoch Firth. The project shows the distillery's commitment to its local environment, which saw the oysters fished to extinction over a century ago. This ia the first project of its type to be undertaken anywhere in Europe.

In addition, a donation from each bottle sold of the travel retail exclusive Glenmorangie Dornoch will be made to the Marine Conservation Society to support DEEP.

posted by Whisky For Everyone at 10:19 AM