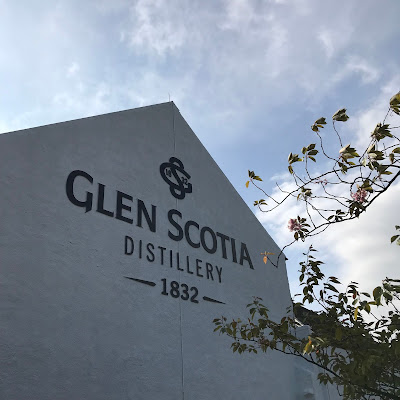 Glen Scotia is a single malt distillery located in the town of Campbeltown at the end of the Mull of Kintyre peninsula. The town was once a major centre for Scotch whisky production with over 30 distilleries operating during its Victorian heyday.

Now only three remain – Glengyle and Springbank being the other two. Earlier this year we were invited for a private tour of Glen Scotia with Iain MacAlister, the Distillery Manager.

Glen Scotia sits a couple of streets back from Campbeltown's largest curving natural harbour. In an unassuming side road is the distillery. It was founded in 1832 by members of the Stewart and Galbraith families and is currently operated by Loch Lomond Distillers, who have been involved since 1999. In 2014 it was taken over by Exponent Private Equity and they set about rescuing the ailing distillery.

Aside from the new ownership and their cash injection, our guide Iain has been highly influential in lifting the fortunes of the distillery and single malt brand. He was born in Campbeltown and his passion and dedication to the town and Glen Scotia are evident. Iain has been Distillery Manager for a decade and has overseen a recent meteoric rise in the profile of the place.

His influence is seen everywhere from the liquid in the bottles of the new range of whiskies to the setting up of a dedicated visitor centre to the recent integration of the distillery in to the annual Campbeltown Whisky Festival.


The distillery has an old feel to it. You especially get that sense when you walk through the black iron gates adorned with the distillery name in gold lettering at the entrance. Much of Glen Scotia is housed in buildings that were constructed in the 1850s and some of the equipment has decades of production time under its belt.

We enter the distillery buildings and first head in to a room that contains two tall silos. These each hold 50 tonnes of grain and the room was formerly used as Glen Scotia's in-house floor maltings. The space was reconfigured to its present set up in 1977. The distillery is currently using Concerto barley and has 28 tonnes of it delivered every week.

Rather than the traditional long horizontal floor, the distillery operated an unusual vertical floor malting - the steeps for soaking barley was at the top of the tall building and then worked its way down using gravity as it went through the malting process.


The mill at Glen Scotia was made by Robert Boby Ltd. of Bury St. Edmunds and was installed in the 1950s. It processes 2.8 tonnes of malt per run and produces a grist with a ratio of 10% flour, 20% husks and 70% middles. Each 2.8 tonne batch is then transferred to the mash tun.

The mash tun is made of cast iron and looks indestructable. It has 40 segmented mesh plates in the base and this creates a very clean wort. Each mash takes eight hours with water added at three different temperatures - 66°C, 76°C and finally 85°C - to extract the soluble sugars in the grist. This produces 7,250 litres of wash per water.


The floor plan is slightly unorthadox at Glen Scotia. Most distilleries follow the flow of the production process but here we have to walk through the still room (- we will come back to that shortly ...) to reach where the fermentation takes place. They have nine washbacks in total and all are made from stainless steel.


Each one takes 14,500 litres of wort, which are made up of the first two waters from each mash (ie: 2x 7,250 litres). The third water is then used to kick start the first of the next mash. The fermentation time is very long and averages 128 hours. The yeast has done its work and begins to die after 48-50 hours, but the wash is left to develop further intense flavours as the yeast drifts to the bottom of the tank. By now it has a strength of 8% ABV.

We returned back to the still house. Here there are one pair of stills and these are on course to produce around half a million litres of spirit this year. Iain explained that a true sign of how the distillery and single malt brand has taken off and changed is that this quantity is five times more than a decade ago.


The wash still has a capacity of 11,800 litres but only ever receives half of each batch of fermented wash (7,250 litres). Therefore, it takes twice as long to distil the wash. This is then put through the smaller spirit still, which has a 8,600 litre capacity. Again, this is never completely filled. There are no computers and Glen Scotia uses the traditional techniques and skills of the stillmen during distillation.


Iain then treated us to a taste of the new make spirit. This comes off the still at 64% ABV and had a wonderful oily texture in the mouth. There was an instant zesty citrus note most reminiscent of fresh lemon peel and this was supported by further notes of sweet almonds, heavy cereals and fresh linen. It is not often we get to sample the spirit while standing next to the stills that produced it.


Much of the whisky destined to be bottled as Glen Scotia single malt is matured on site in a couple of large warehouses. These have casks stacked high up to the roof and they take full advantage of the fresh Campbeltown air. We later returned to one of these warehouses to join a larger group of whisky fans as Iain poured some whiskies for us straight from the cask. A fine way to end a fine tour.

Glen Scotia feels a homely, welcoming and characterful distillery. There is no doubting that the new ownership has undoubtedly improved matters remarkably but they have maintained this charming feel and it seems to fit with both the distillery's and Campbeltown's heritage. If you are ever in the area, then we highly recommend a visit.

Visitor Information
Tours are available all year round and start at the visitor centre at 12a High Street, Campbeltown PA26 6DS.
For further information, please visit www.glenscotia.com.


posted by Whisky For Everyone at 1:54 PM