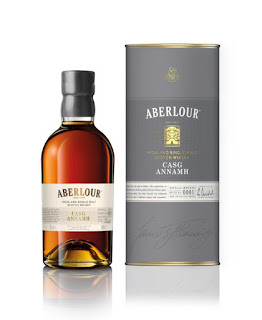 The Casg Annamh is a new small batch single malt from the popular Speyside distillery of Aberlour. The name translates as 'rare cask' from Gaelic. Graeme Cruickshank, the Master Distiller at Aberlour, has selected a number of ex-Oloroso sherry casks made from both American and European oak to produce this first batch. The idea is that subsequent batches will follow a similar principal but will each be subtly different. Casg Annamh is non chill-filtered and bottled at a strength of 48% ABV. It is available worldwide in specialist whisky stores and will carry a price of £55/$70 US per bottle.

The Aberlour distillery is located in the picturesque Speyside village of the same name. The village sits on the banks of the River Spey and the distillery was founded in 1826 by James Fleming. He was a wealthy local business man, who also paid for numerous other buildings and services for the village including the first supply of electricity and the village's hospital, which is still open today and carries his name.

Aberlour is currently owned by Chivas Brothers, part of the larger Pernod Ricard group who took over the distillery in the 1970s. It has an annual production capacity of 3.8 million litres and is best known for its use of quality ex-sherry casks for the maturation of its whisky. Aberlour sits comfortably within the Top 10 in terms of worldwide single malt sales and market share.

"Casg Annamh is a tribute to our passion for sherry and the expertise to create a rare and fine single malt. We carefully hand-pick our Oloroso sherry casks from traditional bodegas in Spain, making sure the wood has exactly the right aromatic qualities for Aberlour."
Graeme Cruickshank.

Our tasting notes - Batch 0001
The colour is deep amber and the nose has a lovely warm and rich set of aromas - there is immediate wood spice (think of cinnamon and all-spice especially) along with some dried fruit (raisins and bitter candied peel in particular) and a distinct nuttiness. Underneath is a hint of green apple and damp earth.

On the palate this whisky feels slightly oily and viscous, but with an initial hit of white pepper. This heat fades and the other characteristics begin to come to the fore. As with the nose there is a richness and warmth. The dried fruits and nuts kick this off (think of raisins, candied orange peel and walnuts - the last two adding a hint of bitterness) and then come further notes of caramel and green apple. The apple seems to become more prominent with time and is reminiscent of boiled fruit sweets. The cinnamon spice is also present and there are hints of cocoa powder, malted cereals and sugar syrup.

The finish is slightly short, especially once the richer dried fruit and caramel notes have faded. This leaves the warming spices, which also dissipate shortly afterwards. This signals the return of the white pepper and its heat.

What's the verdict?
The launch of the Casg Annamh coincided with a significant price hike to the cult classic cask strength A'bunadh in the Aberlour range. This has led many to naturally conclude that it is therefore a replacement for A'bunadh at its old price point. After all, both are presented at above average ABVs and released in small batches.

However, Casg Annamh is a different whisky and should be judged as so. It is pleasant and easy drinking single malt that will keep fans of the brand (and sherry cask matured whiskies in general) happy. The only real negative for us is the disappointingly short finish, which tend to be much bigger and bolder in this style of malt.