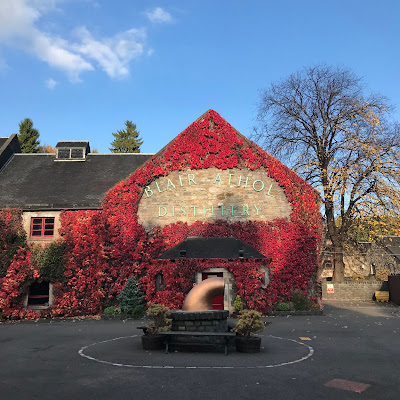 Blair Athol is a gem of a distillery. Nestled in the centre of the Highlands at the southern end of the town of Pitlochry, the distillery is one of the oldest in Scotland that remains in operation. Long labeled as 'The Home of Bell's', it is now starting to market itself in its own right. One recent crisp Autumn afternoon, Matt paid a visit.

My first recollection of Blair Athol as a fledgling whisky fan was not favourable. Driving through Pitlochry and heading south, we had spotted the distillery. Outside was a massive sign proclaiming it as 'The House of Bell's'. At the time, my thinking was that single malts were better than blends and it instantly made me disinterested in the place. Now, a decade later I know better.

Bell's is a big brand and is synonymous with Blair Athol. It has long been a key single malt within the blend and has helped Bell's to become one of the UK's biggest selling whiskies. But Blair Athol seems to be emerging from the Bells' shadow and attempting to make its own voice heard.


It remains a huge contributor to Bell's, and other Diageo blends such as J&B and Johnnie Walker for that matter, and a staggering 99.7% of production goes to this cause. However, the first sign of this shift can be seen before you even enter the distillery. Gone are big signs that welcomed you before, replaced with Blair Athol signage complete with their otter logo - a reference to the animals that are often seen in the Allt-Dour burn that runs through the distillery.

There remain numerous references to Arthur Bell, who was actually English and began his career as a tea blender, and his whisky around the place. 'Afore ye go', the historical motto for Bell's whisky, can be seen on various forms of archive material such as posters, memorabilia and old bottles. Gone however is the gratuitous branding that was evident previously.


Having been on many press trips and private tours of distilleries, we always enjoy just turning up and joining a regular tour. This way you get to see what visitors and regular whisky fans see, without all the fanfare that can surround a media group visit or launch event. It is always fascinating to see what happens at a distillery from day to day, and how each presents themselves differently.

That said, I ended up having a personal tour due to being the only person present at the kick-off time. Derek, a former policeman, was my guide. Despite this the 'no photography inside rule' was enforced, as happens whenever visiting a Diageo distillery as a regular punter.

Blair Athol is one of the oldest distilleries in Scotland and was founded in 1798. The distillery is on part of the larger Atholl Estate and over time has lost the addtional L from its name. It has a wonderfully quaint and traditional feel to it, which is in contrast to the corporate feel of its owners or the hugely successful brand that it is associated with.


We begin in a courtyard, which is dominated by a mass of ivy that covers the distillery wall. It is an impressive sight and one that is heightened by the autumnal red colours of the leaves. We enter through a side door and Derek explains that the distillery operates 24 hours a day for five days a week, starting on a Sunday evening and finishing on a Friday lunchtime. The total production per year is three million litres as a result.

The semi lauter mash tun can hold eight tonnes of malted barley and 28,000 litres of water. At Blair Athol they do between 12 and 15 mashes per week, meaning they can process approximately 100 tonnes of barley. Three waters are added (at 64°C, 64°C again and finally 82°C) to extract the soluble sugars and the process takes six hours in total. Water is taken from the aforementioned Allt-Dour burn, which flows down from Ben Vrackie that sits high above Pitlochry.

The six stainless steel washbacks at Blair Athol, and the mash tun for that matter, are housed in the building that was formerly the old floor maltings. Each washback holds 37,000 litres of wort and once the yeast is added, then the fermentation time is quite short at just 46 hours. This helps to produce the 'nutty, spicy, fruity' spirit characteristic required by Diageo for the blends that Blair Athol contributes to.

The still room was small and had a hot and slightly cramped feel. Four stills - two wash and two spirit - are there and in full operation on my visit. These are decently sized at 4.5 metres tall and were made by Abercrombie coppersmiths in Alloa. With so much of the spirit produced destined to go to blending, it leaves just 9,000 litres per year available to become single malt. That is a tiny amount relatively and explains why many have never heard of or tasted any Blair Athol whisky.


Most of the spirit produced at the distillery is filled to ex-bourbon or ex-bodega casks. Some are stored on site and Derek showed me inside one of the racked warehouses. Casks, some of which were of very decent age, were stacked to the ceiling and as far back as the eye could see. With warehousing capacity at a premium at the distillery, the remainder is sent to mature at other Diageo sites such as Blackgrange and Leven.

It was then time for a tasting. Here Derek pulled out all the stops. My regular tour would have entitled me to a dram of the Blair Athol 12 years old, part of Diageo's cult Flora and Fauna range of malts from their lesser know distilleries. Having not sampled this for a very long time, I was looking forward to it.


However, he also produced three limited editions for me to taste - the current Distillery Exclusive bottling (4,500 bottles, 48% ABV and a marriage of ex-bourbon and ex-sherry casks), the previous Distillery Exclusive from 2016 and the 23 years old that was part of last year's Special Releases collection. I was not expected any of that and had a thoroughly pleasant time sampling each one and talking about all things whisky with Derek.

The tour was finished and it was sad to leave, having had a great experience. I had also timed it well and lucked out as there were about 20 people on the next tour. Blair Athol is a popular destination due to its proximity to the A9, the main arterial road through the centre of the Highlands. Bus loads of people turn up in Summer and they take an impressive 96,000 visitors around each year.

It also succeeds in delivering what most people visiting a distillery would want - old, traditional, picturesque, accessible, quirky and with a good visitor centre and well stocked shop. Blair Athol is well worth a visit if you have some spare time and you are in that area of the Highlands.


Final mention must go to this - Blair Athol has one of the best bars that I have seen for a long time located in its visitor centre. This is the old mash tun from another Diageo distillery (Clynelish) and even includes the rakes and mesh flooring. Here they serve whiskies from across Diageo's portfolio as well as a selection of whisky cocktails and hot toddies.

posted by Whisky For Everyone at 1:05 PM