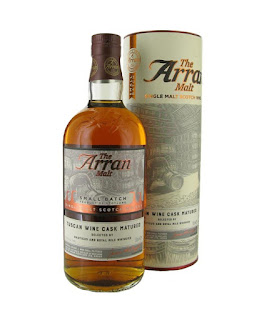 Arran
The island distillery of Arran has announced a collaboration with retailer Royal Mile Whiskies and Edinburgh-based bar Nauticus. The result is a small batch release - the Arran Tuscan Wine Cask Matured. There are just 900 bottles available, which are the result of just three French oak casks that had previously held Sassacaia red wine being married together. The whisky was distilled and filled to the casks in 2008, and will be available via www.royalmilewhiskies.com and in the Nauticus bar in Leith. A bottle will cost £64.95. 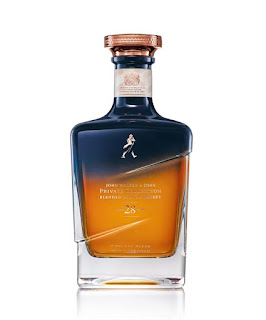 Johnnie Walker
The super premium version of Johnnie Walker, named John Walker & Sons, has announced the fifth and final part of their Private Collection - the 28 years old Midnight Blend. The collection, which was first launched in 2014, is designed to champion the some of the oldest and rarest single malt and grain whiskies in Diageo's portfolio. They have been created by Johnnie Walker's Master Blender Jim Beveridge and his team.

The Midnight Blend features whiskies from the Highlands, Speyside and the west coast of Scotland and there are just 3,888 bottles available. each is presented in a handblown decanter that is blue at the top and becomes clear at the base. It is bottled at 42.8% ABV and will be available via selected specialist retailers at a cost of £575 ($750 US).

"Whiskies aged for 28 years or longer are rare. Our search to find those for Midnight Blend, saw us have access to some of the most mature reserves drawn from the four corners of Scotland. Each individual malt and grain used in the final whisky adds layers of flavour to this final addition to the Private Collection."
Jim Beveridge. 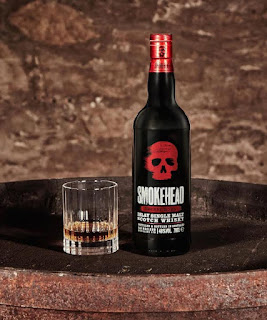 Smokehead
The smoky single malt brand of Smokehead has announced an new addition to its range - the Smokehead Sherry Bomb. The whisky, which comes from an un-named Islay distillery, has seen an intense maturation in ex-Oloroso sherry casks. It follows on from the core bottling of Smokehead and the cask strength version, High Voltage. The Sherry Bomb is bottled at 48% ABV and will cost £65 each. They will be available in selected specialist retailers in the UK initially, before being rolled out globally in late-November.

posted by Whisky For Everyone at 8:49 AM