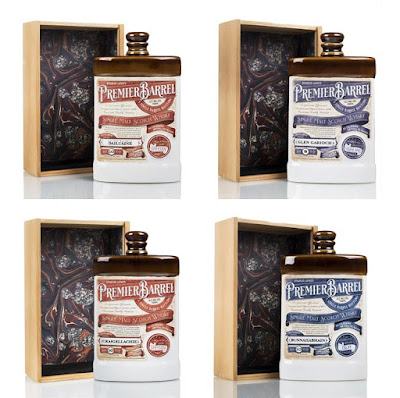 Another week and another story from those prolific independent bottlers Douglas Laing & Co.  This week sees the announcement of a revamp for their Premier Barrel series of whiskies, along with the first four bottlings in the new packaging. The traditional ceramic bottle, which was first launched along with the range in 2008, remains but it is now adorned with a paper parchment label with 'Victorian-style' text.

The first new bottlings are the Bunnahabhain 10 years old (£70), Craigellachie 10 years old (£65), Dailuaine 10 years old 100% Sherry Cask (£62) and Glen Garioch 8 years old (£60). All are bottled at 46% ABV and are non chill-filtered and of natural colour. The new bottles will be available shortly in selected specialist whisky retailers in the Asian, European and UK markets. 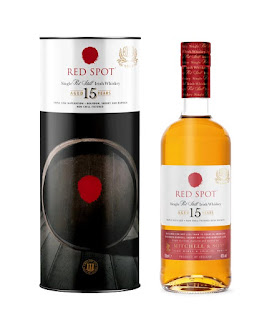 Irish Distillers
The Spot Family has a new member. This week has seen the launch of the Red Spot 15 years old, which has not been on the market since the mid-1960s. It joins the Green Spot and Yellow Spot as a permanent addition to the range, along with the two small batch Green Spot expressions - the Château Léoville Barton and Château Montelena. The new version of Red Spot is a re-working of the classic whiskey which is again created for Mitchell & Son in Dublin by the Midleton distillery in Co. Cork.

The project, which has been 20 years in the making, has seen whiskeys matured in ex-bourbon, ex-Oloroso sherry and ex-Marsala fortified wine casks combined and continues the Mitchell's tradition of using ex-wine casks within their maturation process. All casks involved were made from American oak. Red Spot 15 years old is bottled at 46% ABV and is non chill-filtered. It will be available initially in Ireland only and then in France, the UK, the USA and global travel retailers from January 2019.

"It has been a pleasure and a privilege to work with the Mitchell family on the reimagination of Red Spot and bring a piece of Dublin’s rich whiskey history back to life. It has been 50 years since the world last saw Red Spot and whiskey enthusiasts have long awaited its return."
Kevin O'Gorman - Master of Maturation at Midleton.

The Sexton
The Sexton, the Irish single malt whiskey brand, has seen an official launch in the UK. The whiskey is inspired by the long tradition of whiskey making on the north Co. Antrim coast of Ireland and is made from 100% Irish malted barley. The whiskey has been triple distilled in copper pot stills and then left to mature in a combination of first, second and third-fill ex-Oloroso sherry butts for four years. They are then married by Alex Thomas, the Master Blender for The Sexton, who is one of the few women to hold such a position in the whisky industry.

The Sexton Irish Single Malt was initially launched in the USA last year and will now also be available in selected specialist spirits retailers, bars and restaurants throughout the UK. A bottle will cost £29.

"What makes The Sexton truly special is our maturation process. We’re purposely aging our whiskey in carefully selected casks to create a fresh new style of single malt, which is bold in personality yet extremely approachable. It is fantastic to bring The Sexton to the UK during such an exciting time for the Irish whiskey category."
Alex Thomas.

posted by Whisky For Everyone at 9:52 AM