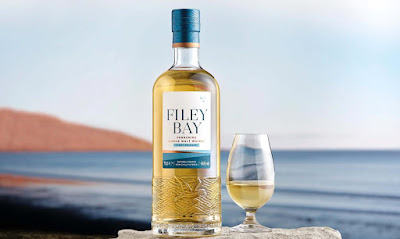 Filey Bay is the first single malt to be put on general release from the Spirit of Yorkshire distillery. The English distillery, which has only been in production since 2016, has already released a series of six preview bottlings under the Maturing Malts Distillery Projects label. Filey Bay is the first ever single malt whisky to be released from Yorkshire and is named after the nearby beach and holiday resort.

The whisky is a limited edition of 6,000 bottles and has been consructed from just 16 carefully selected casks. These were distilled and filled to American oak first-fill ex-bourbon casks during some of Spirit of Yorkshire's early production runs in the Spring and Summer of 2016, resulting in a three year old single malt. It is non chill-filtered and of natural colour with a bottling strength of 46% ABV. A bottle will cost £55 via selected retailers and www.spiritofyorkshire.com.

The Spirit of Yorkshire distillery is the brainchild of Tom Mellor and David Thompson. It is located between the towns of Bridlington and Filey and was the first single malt distillery to be registered in Yorkshire. Production began in Spring 2016 and the current production sits at just over 100,000 litres per year. All barley is grown on Mellor's nearby farm and then malted by a local firm. The milling, mashing and fermentation take place at the Wold Top Brewery, which is located a couple of miles from the distillery and is also owned by the pair.

To read more about the Spirit of Yorkshire distillery and our visit there a couple of years ago - please click here.

Our tasting notes
The colour is a pale lemon yellow and the nose is fresh with initial aromas of orange blossom and crisp green apple. Underneath is a further aroma of lemon sherbet. Then come hints of vanilla, malted cereals, fresh hay, icing sugar and jasmine flowers.

On the palate the vibrancy and freshness continues. There is a wonderful initial lively floral burst, which is led by the orange blossom again but with hints of the jasmine also. Then comes a wave of icing sugar, poached pears and vanilla. The maltiness is present but more robust now and the green apple notes are more subdued than on nose. These are joined by a hints of marshmallow, lemon zest oil, white chocolate, cinnamon and baking spices.

The overall feel of the finish is hot and peppery, but the sweetness of the icing sugar note lingers well. Once this fades you are left with the baking spices from the palate and a good pinch of white pepper and alcohol heat on tongue.

What's the verdict?
Filey Bay is a fresh, vibrant and young whisky that is a very promising first release from Spirit of Yorkshire. The delicate florals and more robust maltiness compliment and balance each very other well. It is not the most complex or complicated single malt but is enjoyable to drink and shows plenty of encouragement for further bottlings to come. There is enough to keep you interested but nothing that is too challenging either. Lovely.