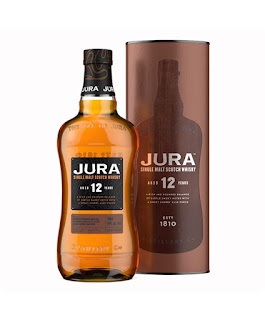 This whisky forms part of the core range from the island distillery of Jura. The range was revamped in 2018 and this 12 years old is joined by other age statements at 10, 18 and 21 years old plus three other 'no age statement' expressions - the French Oak, Journey and Seven Wood. The whiskies involved in the 12 years old have followed two different paths - regular unpeated spirit has matured in ex-bourbon casks before a period of finishing in ex-Oloroso sherry barrels, while rarer peated spirit (which is only made for one month each year) has been matured solely in ex-bourbon casks. The two pockets of stock have then been married together to produce the final whisky.

The Jura 12 years old is bottled at 40% ABV and is widely available globally. A bottle should cost around the £40/ $50 US. For further information on this or any of the other whiskies in the range, please visit www.jurawhisky.com.

Our tasting notes
The colour is a deep golden yellow and the nose is instantly sugary and sweet. Aromas of icing sugar and butterscotch dominate with a underlying whiff of soft and sweet peat smoke. Depth is added by an almond-like nuttiness, dried orange peel and warming spices (think of clove and cinnamon especially), plus hints cranberry and pot pourri.

On the palate this whisky has a rich, soft and rounded feel. The early sweetness is present as on the nose with notes of milk chocolate, butterscotch and barley sugars combining well. Then comes the sweet and gentle peat smoke that seems to underpin everything. This has a dry, dusty and earthy feel to it with hints of moss and dried heather. Then come further notes of robust barley grains, woody oak spices (cinnamon, all-spice and clove in particular with a late pinch of white pepper) and a hint of yeast. The sweeter notes begin to increase as the finish approaches and the dried pot pourri characteristic from the nose develops again.

These florals carry on in to the finish with a heather-like quality and the faint pot pourri note never far away. The soft smoke fades as the sweeter notes come back to the fore. Butterscotch, sugary toffee and milk chocolate come back and linger well.

What's the verdict?
This 12 years old is a good solid entry in to the age statement whiskies of Jura. There is plenty going on with richness and softness being complimented well by a distinct but underlying gentle peat smoke. We look forward to sampling a couple of the other whiskies in the new(ish) range as this has presented a promising start.

Referring back to the previous range, this whisky seems to have more depth and complexity on offer and is a whisky that would be perfect as an introduction to this lightly peated island style.