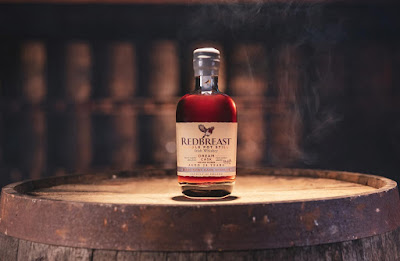 This whiskey is the third release in the Dream Cask series from the Irish pot still brand of Redbreast. The Dream Cask Ruby Port Edition is the first from the brand to be finished in a single ex-Port cask. It stems from experimentation that took place during the development of the recently released Redbreast 27 years old, which is the oldest permanent expression in the core range.
The latest Dream Cask features four casks of whiskey that were identified during that creation process. The youngest is 28 years of age with the oldest being over 30 years. Two ex-bourbon barrels, an ex-Oloroso sherry butt and an ex-Ruby Port seasoned cask were combined by Billy Leighton, the Master Blender for Redbreast, and fellow blender David McCabe in a single ex-Ruby Port pipe.

"It is more than three decades since my predecessors went to the Douro Valley and hand selected the cask which would eventually become the Redbreast Dream Cask 2020. Our third Dream Cask was created with a very significant fortified wine component. This imparts a unique balance of flavours".
Billy Leighton.

The Redbreast Dream Cask Ruby Port Edition 28 years old has been bottled at the natural cask strength of 51.5% ABV and will be available exclusively to members of The Birdhouse, the private members club for Redbreast fans. This will be open for applications from 3pm BST on May 25 until 2.59pm BST on June 2. The ballot will then be drawn and successful applicants notified. A 50cl bottle will cost €490.
Our tasting notes
The colour is deep gold with mahogany tint and the nose is immediately packed with a mixture of spicy and sweet aromas. First comes plenty of dusty baking spice, toasted oak, cedarwood and a bitter nuttiness. This is followed by caramel, brown sugar and a distinct fruity quality - think of very ripe peach and apricot with maraschino cherry. Hints of cocoa powder and beeswax polish are also present.
On the palate this whiskey follows a similar pattern. Again, it is the spiciness that leads the way and then maintains itself all the way through - baking and wood spices are prominent with cinnamon, all-spice and toasted cedarwood with a pinch of white pepper and clove. There is also a lovely bitter nuttiness (think of walnuts and a hint of almond especially) that combines with this spice and adds further depth.
Then a delicious and rounded sweetness develops and gives a richness and viscosity to the whiskey. First comes milky chocolate and fudge followed by the very ripe fruits from the nose. These tend towards being tropical in nature - think of peach, mango and pineapple with a hint of red apple. The maraschino/cocktail cherry is again present, along with dried fruits such as raisin and dried citrus peel (especially orange, but also some grapefruit).
The finish is long and warming with both the fruitiness and spiciness lingering. The sweetness does fade but the other two elements work well in tandom. The tropical and dried fruits are particularly prominent with a hint of gingerbread coming through right at the end.
What's the verdict?
The third edition of the Redbreast Dream Cask is fabulous. It sits well within the set of very limited Dream Cask whiskeys and offers a superb complexity with a multitude of layers. There is plenty going on and we particularly enjoyed the combination of juicy fruits, warming spices and rich sweetness. It is obviously in a high price bracket but we feel that this reflects the rarity and quality of the liquid. Apply through the ballot if you are interested. Now, if only we had a spare €490 ...
posted by Matt C at 2:27 PM