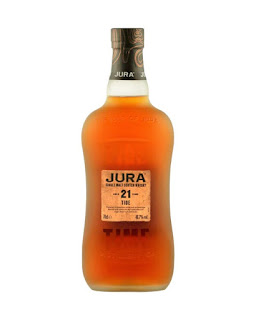 This whisky forms part of the core range from the island distillery of Jura. The range was revamped in 2018 and this 21 years old is joined by other age statements at 10, 12 and 18 years old plus three other 'no age statement' expressions - the French Oak, Journey and Seven Wood. The whiskies involved in this 21 years old have followed two different paths - regular unpeated spirit has matured in ex-bourbon casks before a period of finishing in virgin American oak barrels, while rarer peated spirit (which is only made at the distillery for one month each year) has been matured solely in ex-bourbon casks. The two pockets of stock have then been married together to produce the final whisky.


The Jura 21 years old Tide is bottled at 46.7% ABV and is available globally. A bottle should cost around the £150 ($185 US) mark. It is joined by another 21 years old expression named Time and this is exclusive to the travel retail sector. For further information on Jura or any of their whiskies, please visit www.jurawhisky.com.
Our tasting notes
The coloir is a deep golden yellow and the nose is rich and immediately fragrant. There are aromas of toffee, caramel and waxy honeycomb along with a robust malty biscuit-like quality. Underneath are further aromas of milk chocolate, gingerbread and cookie dough, plus hints of golden syrup and all-spice.
On the palate this whisky has a rich and viscous feel. It is initially sweet and then the heavier malty and spicy notes from the nose begin to develop. The sweetness is led by golden syrup and caramel notes with further notes of heather honey, milk chocolate and sweet almonds underneath. The robust malt grows and becomes very biscuity with plenty of earthy cereal notes present. This goes hand in hand with warming wood and baking spices - think of freshly sawn oak, ginger powder, cinnamon, all-spice and pinches of clove, white pepper and cocoa. A soft, sweet and gentle peat smoke drifts amongst all the elements and adds incredible depth and complexity.
The finish is long and warming with the peat smoke coming more to the fore than at any other stage. This is supported by a distinct chocolate note and the robust maltiness from the palate and nose. The combination is reminiscent of chocolate digestive biscuits. As the sweeter characteristics fade, the spices come forward and work in unison with the smoke to give warmth and dryness.
What's the verdict?
The Jura 21 years old Tide is a lovely whisky and one of the oldest from the distillery on the market. Old Juras are rare and do appear, but this shows what is available and at a reasonable price. The depth and richness, which is backed up by sweet peat smoke and warming spices, is fabulous and makes you want to reach for another glass when you have finished. A good pinnacle to the current Jura core range and well worth a try.
posted by Matt C at 5:30 PM