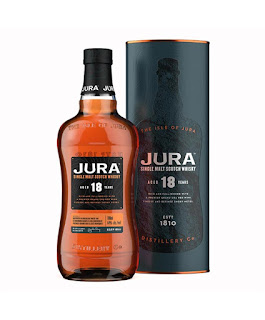 This whisky forms part of the core range from the island distillery of Jura. The range was revamped in 2018 and this 18 years old is joined by other age statements at 10, 12 and 21 years old plus three other 'no age statement' expressions - the French Oak, Journey and Seven Wood. The whiskies involved in this 18 years old have followed two different paths - regular unpeated spirit has matured in ex-bourbon casks before a period of finishing in ex-red wine barriques sourced from Bordeaux in France, while rarer peated spirit (which is only made at the distillery for one month each year) has been matured solely in ex-bourbon casks. The two pockets of stock have then been married together to produce the final whisky.


The Jura 18 years old is bottled at 44% ABV and is widely available globally. A bottle should cost around the £70-75 ($90 US) mark. For further information on this or any of the other whiskies in the range, please visit www.jurawhisky.com.

Our tasting notes
The colour is a deep gold with a hint of reddish amber to it. The nose has a richness and has an immediate fruitiness - think of dried fruit (especially raisins, sultanas and cherries) and a hint of fresh blackcurrant. There is plenty of caramel-like sweetness also, along with aromas of milk chocolate and baking spice. A whiff of sweet and gentle peat smoke is in the background.
On the palate this whisky sees the richness from the nose carry on. Caramel, milk chocolate and toffee combine with hints of molasses and black treacle to give a mouth coating experience. Then come the fruity notes - this is again a mix of dried fruits (raisin, sultana, dark cherry and candied orange peel) and background hints of fresh fruit (especially blackcurrants and brambles). There are also notes of vanilla, coffee grounds and cocoa that develop with time. Everything is underpinned by soft, gentle and sweet peat smoke and warming baking spices (think of cinnamon and all-spice especially). The combination hints at Black Forest gateaux.
The finish is of decent length and offers plenty. The first notes to fade are the sweeter ones and this allows a maltiness to come through. This works well with the drier spicey and smoky elements to give a delicious warmth. The fruitiness is also present, fading slowly with a hint of kirsch developing.
What's the verdict?
This Jura 18 years old is a sumptuous whisky that has a luxurious and viscous feel to it. The ex-red wine casks have added layers of flavour that combine superby with the delicate and sweet peat smoke. It feels classy and is a single malt to sit down, savour and enjoy. It also represents good value at the £75 price point as most 18 year old expressions are now in the £90-100 region, with some over that.