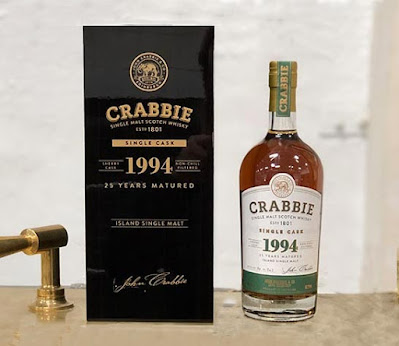 This whisky is a new single cask single malt from independent bottler John Crabbie & Co. The whisky has been sourced from the Tobermory distillery on the Scottish island of Mull and was distilled and filled to an ex-sherry hogshead cask in 1994. This was a period that saw relatively intermittent production following its aquisition by Burn Stewart Distillers the previous year. After 25 years the cask has yielded just 247 bottles, which are exclusive to the UK.
The Crabbie name has been associated with the Scotch whisky industry since the early 1800s and founder John Crabbie selected whiskies for blending and bottling from all over Scotland. He is considered an early pioneer of whisky blending with links to numerous distilleries around Scotland. This included owning the now-closed distilleries of Westfield in East Lothian and Yardheads in Leith.
After disappearing in the early 20th century, John Crabbie & Co. has now been reborn under the ownership of Halewood Wine & Spirits. This includes a range of age statement single malts, both core and limited edition, plus the non age statement Yardhead that pays homage to company's past
The reinvention includes the building of the new Chain Pier distillery in Granton, Edinburgh and this is designed to produce single malt and single grain whisky. The first casks were laid down to mature in November 2018. Crabbie's also have a second distillery, named Bonnington, and this is based in Graham Street, Leith - one of the brand's spiritual homes. It will be producing single malt, as well as Crabbie's gin.
The John Crabbie 1994 Single Cask is bottled at the natural cask strength of 46.2% ABV and is non chill-filtered and of natural colour. Each bottle will retail for £300 / $370 US and is available from selected UK specialist whisky retailers.
Our tasting notes
The colour is a deep golden yellow and the nose has an immediate rich and fruity quality on the nose. Aromas of dark dried fruits are evident - think of raisin, cherry plus bitter orange peel. Then come further aromas of heather honey, toasted pecans, butter, milk chocolate and caramel followed by pinches of cinnamon, clove and sea salt.  The combination is extremely inviting.
On the palate this whisky is warming, viscous and rich. The sweet notes and fruity characterisitics rise first and work superbly in tandom - think of caramel, heather honey, milk chocolate and a hint of golden syrup combined with raisins, sultanas and a suggestion of dried bitter cherries. The dried orange peel from the nose is also back but feels a little more prominent now and maybe tending towards orange oil.
Then comes a big hit of nuttiness - think of those toasted pecans again, plus walnuts and bitter almonds skins. Underpinning all of these elements is a distinct and warming earthy characteristic that mingles notes of post-bonfire ashiness and complex baking spices - imagine cinnamon, all-spice, cloves and a tiny hint of liquorice.
The finish is on the short side and quickly dries out. The sweet and dried fruit notes fade to leave the nutty, spicy and earthy elements to play together. Then they are gone too and that is that.
What's the verdict?
This 1994 Single Cask 25 years old is delicious and one of the best Tobermorys that we can remember tasting to date. Whoever chose the cask at John Crabbie & Co or Halewood did a great job. It is a big, bold and rich whisky and one with plenty of layers of flavour, depth and complexity.
Whiskies of this age can be overpowered by the cask influence but here the combinations between sweet, nutty, fruity and spicy are very well balanced. It has created a fabulous whisky as a result. Definitely one to check out if you have a spare £300 burning a hole in your pocket.
posted by Matt C at 4:32 PM