Review - The Lakes WhiskyMaker's Reserve No.3 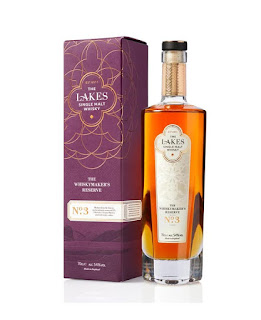 This new whisky is the third bottling from the English distillery of The Lakes in the WhiskyMaker's series of single malts. The Lakes WhiskyMaker's Reserve No.3 is a limited edition of 9,700 bottles and has been created by Dhavall Ghandi, the Master Blender for The Lakes. It has been matured in an intriguing combination of ex-sherry casks including ex-Cream, ex-Oloroso and ex-Pedro Ximenez sherry, plus ex-red wine casks. Ex-Cream sherry casks are particularly unusual in whisky maturation and are rarely used. It continues the distillery's experimental 'exploration of oak' ethos. The WhiskyMaker's Reserve No.3 has been bottled at the natural cask strength of 54% ABV and is non chill-filtered and of natural colour.
The Lakes distillery is located near Bassenthwaite Lake in the north English county of Cumbria. It was founded by Paul Currie and a consortium of private investors. Production began in 2014 and current capacity is 240,000 litres of spirit per year. There are two copper pot whisky stills and another still for the production of gin. The distillery also has an award-winning visitor centre and has become one of the leading new attractions in the Lake District area.

"The spectrum of flavours achieved through the use of these four different sherry and red wine casks create depth and complexity. These were married over twelve months allowing the flavours to gently integrate and develop."
Dhavall Ghandi.

The Lakes WhiskyMaker's Reserve No.3 is available now from www.lakesdistillery.com and will cost £65 per bottle.
Our tasting notes
The colour is golden amber and the nose is immediately woody and sweet. There are initial aromas of caramel and dark chocolate, along with toasted oak and a hint of beeswax furniture polish. Underneath are further aromas of dark dried fruit (especially raisins and candied citrus peel), warming baking spices (cinnamon and clove in particular) and apricot jam.
On the palate this whisky follows a similar pattern - intense notes of wood and sweetness arrive first before softer and fruitier ones follow. The vibrant oak gives a peppery warmth and has vanilla never far away. This, combined with the dark chocolate from the nose and a hint of cereal, gives a robust and slightly bitter feel.
The sweet elements, especially toffee and caramel notes, come through to create depth and balance. This is accentuated by dried fruit notes that include hints of raisin, fig, sultana, candied orange and the tiniest suggestion of preserved lemons. Then the woodiness returns but it is not more reminiscent of baking spices - cinnamon, all-spice and mace with a grate of nutmeg and a drop of clove oil.
The finish is of decent length but becomes increasing dry and warming. The sweeter characteristics fade quickly but this leaves the woody, spicy and peppery notes to linger. The heat and dryness makes the mouth water.
What's the verdict?
This third edition in the WhiskyMaker's series is an intriguing whisky. With so much ex-sherry influence you would expect it to be packed with sweetness, but while these elements are present it is the intensity of the oak and spices that dominate. A dash of water really helps to knock this feeling back and create a softer and more approachable whisky.
It has been interesting how each of the three WhiskyMaker single malts have gone in different directions. This shows The Lakes have a confidence in their spirit to take it down alternative paths and the use of slightly unorthadox casks at times backs this thought up. It will be interesting to see which direction they choose next ...
posted by Matt C at 6:01 PM