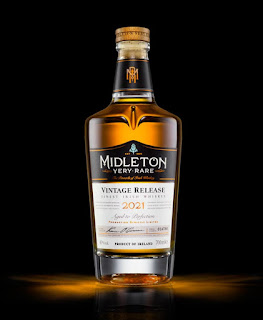 This is the latest release by the super premium Irish whiskey brand of Midleton to its annual Very Rare series - the Midleton Very Rare 2021 Edition. It is the 38th bottling in the legendary series. The new edition marks the first to be created by Kevin O'Gorman who is only the third Master Distiller of the series since it first appeared in 1984 and follows Barry Crockett and Brian Nation. The 2021 Edition is made using old and rare single grain and single pot still whiskeys aged between 15 and 36 years of age, including some distilled in 1984 as a homage to the origins of the series. All the whiskeys used have been matured in American oak, which is in keeping with previous editions of the Very Rare series.
Midleton is currently produced in Co. Cork in southern Ireland at the Midleton distillery. This is owned by Irish Distillers, the Irish whiskey wing of Pernod Ricard, and produces a staggering 19 million litres of whiskey a year in the numerous styles needed for the Irish Distillers portfolio - this includes brands such as Jameson, Power's and Redbreast. Only a very small percentage of what is produced each year is set aside and eventually used for the Very Rare releases.

"It is an amazing honour to be only the third guardian of this special whiskey. The legacy created by Barry Crockett and carried on by Brian Nation has become an annual ritual and each whiskey is very much of its time. I'm excited to hear people's thoughts on my 2021 version of Midleton Very Rare."
Kevin O'Gorman.

The Midleton Very Rare 2021 Vintage is bottled at 40% ABV and will be available online and in world markets including Australia, Canada, France, Germany, Ireland, the UK and the USA. A bottle will cost £156/ €180/ $220 US.
Our tasting notes
The colour is deep gold and the nose has an immediate elegance to it. Aromas of vanilla, coconut cream, palm sugar and butterscotch mingle with green apple and tropical fruit (think of ripe banana, nectarine and a hint of juicy apricot). Then come further aromas of warming spice (imagine cinnamon and gingerbread especially) and delicate florals - these made us think of rose water and orange blossom.
On the palate this whiskey has a creamy and almost viscous feel. Again, the vanilla and coconut-like notes rise first and these are joined by notes of honey, golden syrup and butterscotch. The coconut has a drier and more dessicated feel now, rather than the coconut cream as on the nose. Then comes bittersweet cereals and a distinct note of baked apple. These characteristics are supported by a hefty pinch of cocoa powder and dusty, warming spices - think of cinnamon, mace, clove and a hint of pink peppercorn. This warmth is accentuated by a further hint of gingerbread and almond biscuits.
The tropical fruit notes begin to develop, but this happens much later than on the nose. Dried pineapple, preserved lemon and caramelised banana lead the way with hints of peach, apricot jam and candied lime coming through also. There is a late chocolate-like bitterness with faint suggestions of roasted coffee and that rose water from the nose.
The finish is of decent length with the bittersweet cereals and dusty, warming spices gripping and holding on longest. The sweeter elements and the fruity characteristics, both green and tropicals, fade and leave these other notes to bloom. Both are accentuated by a very late suggestion of milk chocolate.
What's the verdict?
This 38th version of the fabled Midleton Very Rare is a fine addition to the series. It is also a fine debut by new Master Distiller Kevin O'Gorman. Listening to him at the global media launch he explained that he wanted to create a whiskey that 'combines the best of distillation and the best of maturation'.
This Midleton Very Rare 2021 Edition has a lovely depth and complexity of aroma and flavour that sits alongside a wonderful elegance, finesse and balance. It cannot have been easy following in the big footsteps of his predecessors but he has made an excellent start.
posted by Matt C at 4:26 PM