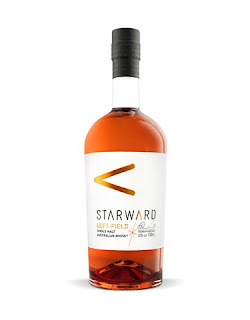 The Left-Field is the latest whisky released to the core single malt range of the Australian distillery Starward. The whisky combines their Australian single malt with the influence of Australian red wine barrels. Left-Field has been fully matured in French oak ex-Cabernet, ex-Pinot Noir and ex-Shiraz barrels sourced from wineries in the Barossa Valley and Yarra Valley wine regions. These have been aged seperately before being married together to create Left-Field. It joins two other single malts, the Nova and Solera, and a blend named Two-Fold in the current core range. These are supplimented by limited editions and collaborations on occassion.

Starward is produced at the New World Whisky Distillery and is located in the Melbourne suburb of Port Melbourne in the state of Victoria. It was founded by David Vitale in 2004 after a visit to a micro-distillery in Tasmania captured his imagination. The following years were used to construct the original distillery at Essendon Fields, close to Melbourne Airport, and production began in 2008. In 2016 the distillery was moved to the current site to enable a significant increase in capacity.
The first release of Starward appeared in March 2013. All of Starward's whiskies are made using 100% Australian grown barley. The original aim of Vitale and Starward, which remains true to this day, was to introduce a younger vibrant crowd to whisky and to create a product that could be easily used by bartenders and mixologists. There are also a limited series of bottlings named New World Projects - these are innovative series of experiments to show the versatility of the spirits in different casks.

"We felt it was important for us to create a flavourful but easy drinking and approachable whisky that talks of the place it is made. Very few whiskies can do this but we believe we have an opportunity with Left-Field - an Australian whisky matured in Australian wine barrels."
David Vitale.

The Starward Left-Field is bottled at 40% ABV and is exclusive to selected European markets. A bottle will cost £35/ €40 each. In the UK, it is currently exclusive to supermarket Waitrose and this is where we purchased our bottle.

The colour is deep gold with a slight reddish tint and the nose has an interesting mix of sweet and fruity aromas. Aromas of toffee, golden syrup, caramel and marshmallow mingle with dried fruits (think of raisins and dark cherries in particular) and crisp red apple. Malted cereals and a good pinch of baking spices add depth and complexity.

On the palate this whisky has a lovely richness and it is the sweeter notes from the nose that hit first. Notes of toffee and syrup (more maple than golden now) kick things off and are quickly joined by further notes of marshmallow, icing sugar and a hint of cream soda. Hints of heather honey and crumbly brown sugar give plenty of depth to this sweetness. Then comes a wave of fruity characteristics - think of dried cherries, dried bitter orange peel and fresh red apple skins especially with hints of cranberry, raisin and Further complexity is added by pinches of cocoa powder and baking spices (especially cinnamon and all-spice). Late notes of walnut bitters and milk chocolate give a further layer of flavour.

The finish is long and generally soft, before becoming slightly hot and peppery right at the end. The sweet elements and then the fruity characeristics fade and this leaves the malted cereals from the nose and warming baking spices from the palate to become more prominent.

The Starward Left-Field is a revelation. It tastes older than it undoubtedly is (all Starward's are released at a relatively young age due to the Melbourne climate) and is sweet, juicy and very easy going. We imagine that it will be amazingly versatile, which is exactly how Starward design their whiskies.

It is great neat and over ice with some freshly peeled orange zest (we have tried both so far) and imagine that it will mix very well within a cocktail - we are yet to try this. Left-Field offers plenty to the drinker and is a especially good considering the price point. We are certainly glad that we have invested in a bottle of our drinks cabinet.