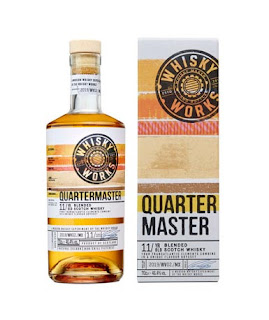 The Quartermaster is a blended Scotch whisky that forms part of Whisky Works, an experimental range of whiskies that have been developed by Whyte & Mackay. This whisky features both single grain from the Highlands and two Speyside single malts. The grain whisky was matured in ex-rum casks before being finished in ex-Pedro Ximenez sherry casks, while one single malt was matured in American white oak ex-bourbon barrels and the other in ex-sherry butts. The minimum age of all the whiskies involved is 11 years and there are just 2,134 bottles created. Please note - this whisky was released in October 2019, but most major retailers are showing it as still in stock.

The Whisky Works project is overseen by Greg Glass, Whisky Maker at Whyte & Mackay. It is designed to take whiskies in an unorthadox direction and away from the traditional flavour profiles of their other whisky ranges. These include the famous Whyte & Mackay blend and the Dalmore, Fettercairn, Jura and Tamnavulin single malts. They also own the Invergordon grain distillery. This direction is achieved through the use of different spirits and casks of differing origins in combination. The range features this Quartermaster 11 years old alongside the blended malt King of Trees, The Speyside 20 years old single malt and The Glaswegian 29 years old single grain.

The Whisky Works Quartermaster 11 years old is bottled at 46.4% ABV and is non chill-filtered. As mentioned it remains available in selected specialist whisky retailers and will cost around £75/ $95 US per bottle.

The colour is golden yellow and the nose smells very promising indeed. Sweet aromas rise from the glass initially - think of golden syrup, brown sugar and a hint of treacle. Background aromas of fresh tropical fruit, especially pineapple and peach, are also present and supported by hints of vanilla, burnt orange and gingerbread plus pinches of cocoa powder and cinnamon.

On the palate this whisky has an instant sweetness and maltiness. Notes of honey and golden syrup mingle with robust and bittersweet cereals. Underneath are further notes of vanilla, coconut and butterscotch. This gives the whisky a creamy and soft feel. Some crumbly brown sugar elements aid this feeling. With time other notes develop - there are three distinct sets of fruity notes. First comes a fleeting green fruit characteristic most reminiscent of crisp fresh apple and pear, then the fresh tropicals from the nose (pineapple and peach again, plus a suggestion of mango). Finally there is a layer of juicy dried fruit - think of raisins, sultanas, dates and orange peel especially.  Hints of almond, milk chocolate, stem ginger and pinches of cinnamon and white pepper complete the profile.

The finish is a little on the short side, but flavoursome while it lasts. The sweet and fruity elements fade first and this leaves the robust cereals and those late nutty and spicy notes to come to the fore. Very pleasant and makes you want another sip.

The Quartermaster 11 years old is a great introduction to the Whisky Works project and range. It is a traditional Scotch blend but mixes a number of unorthadox and regular cask maturations together, and to good effect. The result is a whisky that is full of aroma and flavour, and one that is very enjoyable. We now cannot wait to sample some of the other innovative whiskies in the range and see how the project develops. A delicious whisky and an interesting concept.