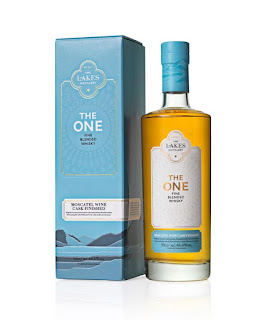 The Moscatel Wine Cask Finished is the latest edition to the range of The One blended whiskies from The Lakes Distillery. The One is a series of whiskies, all of which use exactly the same blend that is then finished in different cask types. The blend has The Lakes single malt at its heart and also features single grain and single malt whiskies from the Highland, Islay and Speyside regions of Scotland. The One Moscatel Wine Cask Finished has seen the blend matured for the final months in ex-Moscatel sweet wine barrels sourced from the Cádiz province of Andalucia in the south of Spain.

The Lakes Distillery is located near Bassenthwaite Lake in the north English county of Cumbria. It was founded by Paul Currie and a consortium of private investors. Production began in 2014 and current capacity is 240,000 litres of spirit per year. There are two copper pot whisky stills and another still for the production of gin. The distillery also has an award-winning visitor centre and has become one of the leading new attractions in the Lake District area.

"Using an identical recipe each time enables us to showcase the impact of oak and cask seasoning on The One. The characteristics of Moscatel and American oak have trandformed the blend into a fresh and uplifting whisky."
Dhavall Gandhi - Whiskymaker at The Lakes.

The One Moscatel Wine Cask Finished is bottled at 46.6% ABV and is both non chill-filtered and of natural colour. It will be available from Thursday February 25 at selected specialist whisky retailers and via www.lakesdistillery.com. A bottle will cost £48.
Our tasting notes
The colour is pale gold and the nose has a sweet, vibrant and floral feel to it. Aromas of heather honey, lemon blossom and jasmine lead the way along with some further aromas of vanilla and grapefruit peel. Underneath are subtle suggestions of green apple, brown sugar, warming baking spices and a hint of chalk.
On the palate this whisky has an immediate sweetness and seems to have lost its uplifting delicacy. This is confirmed as the sweetness combines with a smoky/peaty element that was not really detectable on the nose. The peat smoke has an earthy, mossy and bittersweet quality which beautifully brings out that note of grapefruit peel detected earlier. The sweetness has a sugary feel that is reminiscent of crumbly brown sugar and fresh honeycomb. These notes are accentuated by a big hit of sweet and malty cereal combined with plump juicy sultanas. With time, more subtle notes begin to appear - think of vanilla, crisp green apple, caramelised pear and a pinch of cinnamon. Late hints of candied lemon and lime, plus white chocolate and gingerbread complete the profile.
The finish is lingering and hot. The sweet elements fade first, followed by the green and citrus fruits. This leaves the increasingly influential peat smoke and the warming spices to fight it out, with a white peppery heat lasting longest.
What's the verdict?
The One Moscatel Wine Cask Finished feels like a whisky of two halves. The nose gives off a wonderful fresh, sweet set of aromas that have subtley and delicacy entwined. It is enticing and makes you want to sample. Then when you do, you are presented with a seemingly different whisky - one which is still sweet but bigger and bolder with earthy peat smoke to the fore. It is not unpleasant but just unexpected as neither of us detected any suggestion of smoke on the nose.
This is a good whisky and well worth a try, especially given that there are not many out there that have any ex-Moscatel wine barrel influence. However, in our view it would become a great whisky if the two halves matched. Especially if it followed the same track as the fabulous nose.
posted by Matt C at 4:01 PM