Here is the news from this week ... 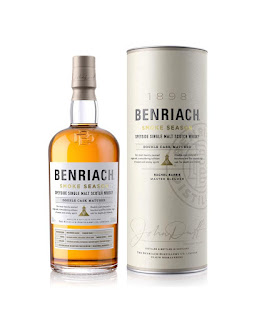 Benriach
Benriach has announced a limited edition single malt that celebrates the 50-year heritage of producing peated spirit at the innovative Speyside distillery - the Benriach Smoke Season. The small batch release showcases the peated spirit, which has been distilled for a short period each year since the early 1970s. The whisky has been created by Dr. Rachel Barrie, the Master Blender for Benriach, and features peated spirit matured in toasted virgin American oak casks and first-fill ex-bourbon barrels. It is the most intensely peated single malt ever released by the distillery.
The Benriach Smoke Season is bottled at the cask strength of 52.8% ABV and is both non chill-filtered and of natural colour. It will be available in worldwide markets from early March and then the USA in June. A bottle will cost £53/ $75 US.

"Smoke Season is a special time of year in the distillery calendar and this new addition gives the opportunity to discover the sweet and smoky character of Benriach from Speyside, a whisky-making region rarely associated with peated malt."
Dr. Rachel Barrie. 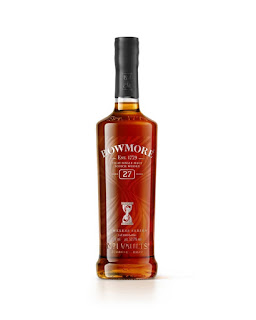 Bowmore
The iconic Islay distillery of Bowmore has announced the latest addition to their Timeless Series of rare single malts - the Bowmore Timeless 27 years old. The whisky has been matured in a combination of ex-bourbon and ex-sherry casks for its first 15 years, before then being combined and matured for a further 12 years in first-fill ex-Oloroso sherry butts. It has then been bottled at the natural cask strength of 52.7% ABV. The Bowmore Timeless 27 years old is presented in a distinctive hourglass-shaped black casket and will be available in selected global markets. There are just 3,000 bottles and each will cost £1,500/ $2,100 US. 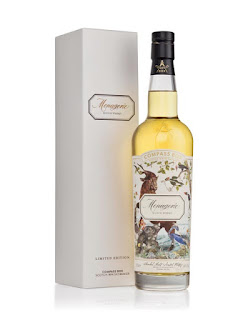 Compass Box
The independent whisky blenders of Compass Box have announced a new limited edition blended malt. The Menagerie is said 'to explore Scotch whisky's wilder side' and has been created by James Saxon, the lead whiskymaker at Compass Box. He has combined four single malts from the Highlands (Deanston distillery), Islay (Laphroaig) and Speyside (Glen Elgin and Mortlach) with a pocket of Compass Box's 'Highland Blended Malt'. The Menagerie is released at 46% ABV and is both non chill-filtered and of natural colour. There are just 7,741 bottles and these will be available in selected global markets. A bottle will cost £90/ $125 US.

"Scotch whisky has a huge variety of flavour profiles – when whiskymaking, we pay attention to those parcels that deviate slightly from the normal - ones that taste that little bit wilder than others. And it is these strange and beautiful creatures that we have brought together to create our Menagerie."
James Saxon.

posted by Whisky For Everyone at 12:01 PM