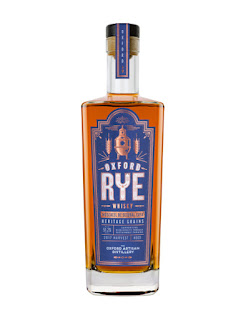 This new whisky is the third release of the rye spirit produced at The Oxford Artisan Distilley (or TOAD for short). The English distillery has bottled this to celebrate its fourth anniversary. The spirit was made using heritage varieties of grain that were harvested in Autumn 2017.  The composition of the mash was 90% maslin (a blend of 70% rye and 20% wheat that were grown in the same field) and 10% malted barley. The spirit was then matured in American oak ex-bourbon barrels for 17 months, before being transferred to ex-Moscatel wine barrels sourced from Portugal. The Oxford Rye Batch #3 follows the first two batches that were released earlier this year in April and July respectively.

The Oxford Artisan Distillery was founded in 2017 by Tom Nicolson and sits on the outskirts of the city of Oxford. The first production took place on July 27 of that year and has its bespoke stills, designed in conjunction with South Devon Railway Engineering, housed in an old barn. The distillery has to date produced single malt and rye whiskies, various gins and vodka, using only heritage varieties of grain grown organically. They are advised by archaeobotanist John Letts. He has spent 25 years researching and growing ancient cereals that were commonly farmed in the UK before industrial farming was introduced.

"Our first batch was a classic take on American rye whiskey. The second was inspired by Oxford, and with Batch #3 I wanted to bring more cask influence to our rye spirit. This batch of whisky suits this season impeccably and is perfect to toast our first four years."
Chico Rosa / Master Distiller at TOAD.

The TOAD Oxford Rye Batch #3 consists of just 551 bottles and these are released at the natural cask strength of 51.2% ABV. Bottles are available via the TOAD website and a handful of specialist whisky retailers in the UK. A bottle will cost £120.

The colour is a vibrant coppery gold and the nose is highly fragrant with a mix of floral and fruity aromas. There is plenty of fresh green apple and pear alongside a hint of tropical fruit (think of banana and pineapple). These are followed by scented jasmine and honeysuckle, plus sultanas and almond. A pinch of white pepper and a hint of grassy herbal aromas also come through.

On the palate this whisky has an initial peppery spice but this quickly gives way to an intriguing set of flavours. There is an intense mix of herbal and sweet notes that threaten to overpower each other, but just about stay in balance. Eucalyptus, menthol and a hint of juniper mingle with notes of golden syrup, vanilla fudge and marzipan. Its a complicated marriage. As things settle the fruit, both green and tropical, begin to show themselves. The apple and pear are crisp and green while the banana and pineapple are a touch over ripe. They are joined by a pinch of crumbly brown sugar and juicy sultanas. Late hits of baking spice (especially cinnamon, nutmeg and powdered ginger), cocoa and marshmallow reound things off.

The finish is of decent length and grips the tastebuds. The fruity and sweet elements slowly fade. This allows some peppery and robust cereals  and oaky characteristics to come through and these are complimented by the complex herbal notes. The result is a bit of pleasant heat and dryness.

The Oxford Rye Batch #3 is a complex beast of a whisky for something that is so youthful. There is plenty going on both from the spirit and the casks. They do not always sit comfortably together but it creates much interest and you find something different literally with every sip. It is an intriguing whisky and one that shows superb promise, but one that maybe just needs to find its direction. We cannot wait to sample some of TOAD's other offerings now.