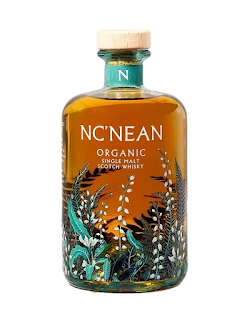 This whisky was the third ever single malt release from the innovative and pioneering eco-friendly distillery of Nc'Nean. The spirit is made from unpeated organic Scottish barley and this batch has been matured in a combination of ex-bourbon barrels and ex-red wine STR (shave, toast and re-char) casks. Batch 2 consists of just 5,000 bottles and follows the inaugural release, named Ainnir, which sold out immediately in September 2020 and Batch 1. All the spirit involved was distilled in April, May or June of 2017 and then bottled in October and November 2020. They have since moved on to subsequent batches but the spirit recipe and cask combination remains the same. Each batch consists of just 14 casks.

Nc’nean was founded in 2017 by Annabel Thomas. It is located within the Drimnin Estate, which is owned by Thomas' parents after they purchased it in 2001, on a remote west Highland peninsula overlooking the isle of Mull. The name is an abbreviation of Neachneohain, which translates as Queen of Spirits from Gaelic.

Distillation began in March 2017 but Nc'Nean has had sustainability at its core since its planning stage. It has just become the UK’s first distillery to gain Net Zero status with carbon dioxide emissions as close to zero as possible.  The distillery is certified organic, powered by 100% renewable energy, plus recycles 99.97% of its waste. Their whisky is also bottled in 100% recycled glass and is vegan friendly. The annual production capacity is 100,000 litres.

The Nc'Nean Organic single malt batches are all bottled at 46% ABV and are both non chill-filtered and of naturaal colour. They are available via selected specialist retailers and www.ncnean.com. A bottle will cost around the £48 mark.

The colour is bright gold and the nose is fresh and vibrant with initial aromas of crisp green apple, delicate cereals and butterscotch. Then comes further aromas of golden syrup, white chocolate and freshly sawn oak, plus hints of dried tropical fruits (think of apricot, pineapple and a suggestion of mango) and gingerbread.

On the palate this whisky is equally as fresh as vibrant as on the nose. An initial kick of white pepper subsides and gives way to the crisp green apple and golden syrup notes. These are quickly joined by some chocolate (this is more milk than white now) and toffee, which both add to the sweetness.

Then the wave of dried tropical fruits come through - imagine apricot and pineapple again, plus hints of sultana and cranberry - plus further hints of fresh lemon zest and ginger cake. Underpinning everything are the increasingly robust malty cereal notes, which add depth and structure, and distinct oaky characteristics. This is reminiscent of oak shavings and gives vanilla and dessicated coconut notes along with a drying warmth towards the end.

The finish is of decent length and gets drier and warmer with time. The luscious sweet elements and fruity characteristics fade first and this leaves the robust cereals and oak notes to linger. A late hint of ginger and cocoa powder rounds things off nicely.

This our first try of anything from Nc'Nean and we, like many before us, are impressed. It is always exciting to get a taste of what a new distillery is doing. The whisky is clearly youthful and there is no getting away from that, but you can tell that the spirit is well made and with good structure. It has also been sympathetically matured. The next step is how they develop from this strong start point.

The interesting thing to read is that they have been distilling two style of single malt to deal with demand - a lighter style destined for short maturation such as with this Batch 2, and a slightly heavier style designed to spend longer time in cask. Nc'Nean have already wond some decent awards for their spirit and their eco-friendly credentials are second to none, so the future looks very bright. And a new distillery pitching a whisky for under £50 should also be applauded.

This blog is an amazing one, the contents here are always very educative and useful, the reason I make it my regular blog of visit so as to widen my knowledge every day, thanks for always sharing useful and interesting information, you can checkout this UNIMED post utme past questions pdf download