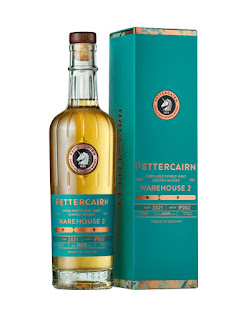 This whisky is the second release in the annual Warehouse 2 limited edition single malt series from the east Highland distillery of Fettercairn. The small batch series is designed to showcase the variety of cask types maturing in Warehouse 2 - a traditional dunnage warehouse at the distillery where some of their finest whiskies are stored. Batch 002 follows last year's inaugural bottling and also released as no age statement. It is a combination of differing ages that have been matured in first-fill ex-rye whiskey barrels and first-fill ex-bourbon casks, both sourced from America. These casks have yielded just 6,000 bottles. The whisky is also non chill-filtered.

"I never cease to be inspired and enthralled by the diversity and quality of the amazing stock we have in our warehouses. This second release takes us on a deep dive into further exploration of the Fettercairn flavour and allows us to show a more experimental side to our approach."
Gregg Glass / Whisky Maker at Whyte & Mackay.

The Fettercairn Warehouse 2 Batch 002 has been released at a strength of 48.5% ABV and is available via selected specialist whisky retailers in world markets. This includes Belgium, France, Germany, the Netherlands and the UK. A bottle will cost £55/ €65.
Our tasting notes
The colour is pale gold and the nose has a delcious vibrancy and freshness to it. Lush tropical fruits (think of pineapple, starfruit and mango) combine with heather honey, vanilla, white chocolate and gingerbread aromas. Further baking spice aromas such as cinnamon and mace add depth along with hints of marzipan and orange oil.
On the palate this whisky has a lovely mouthfeel. That immediate vibrant nature is again evident and is underpinned by a distinct and gripping cereal note. This has a feel of malted biscuits and barley husks to it. The fresh juicy tropical fruits are again present and give the whisky a luxurious feel - think of the pineapple, starfruit and mango from before but with hints of passion fruit and lychee. Runny heather honey and a suggestion of golden syrup give extra sweetness, along with some white chocolate and toffee.
The sweet elements are balanced by the cereals and an increasing note of baking spice. The cinnamon and mace from the nose are joined by all-spice, cardomom and powdered ginger. There is also the slightest suggestion of some candied orange and nutmeg also. Late oak and vanilla notes give further complexity.
The finish is of decent length and becomes warmer, spicier and oakier with time. The tropical and sweet characteristics linger but fade, and this brings through the baking spices and gingerbread notes from before. The oak is more prominant that at any point now and is reminiscent of fresh wood shavings.
What's the verdict?
This is another fine offering from Fettercairn and one that shows how good this Warehouse 2 series is going to be. We loved the inaugural offering last year and this one is also delicious, albeit heading in a different direction. The distillery is known for its tropical character and here the cask choice has accentuated this to new heights it seems. Grab it while you can if it is of interest as it appears to be selling fast and has already gone from some retailers. Superb.
posted by Matt C at 1:21 PM