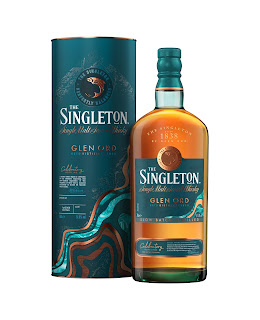 This limited edition bottling from the popular Singleton single malt brand celebrates the opening of its innovative new visitor centre at the Glen Ord distillery in the north Highlands. The Singleton of Glen Ord Celebratory Edition will only be available at the distillery in Muir of Ord, which is north of Inverness. It has been created by Maureen Robinson, the retiring Master Blender for The Singleton, and uses just 12 second-fill ex-sherry hogshead casks. It is designed to show off and enhance Glen Ord's fruity distillery character. The Celebratory Edition is bottled at 51.8% ABV and is both non chill-filtered and of natural colour. Details of the price were not included in the press release.

The new Singleton visitor centre at Glen Ord (pictured, below) is part of a £185 million investment in Scotch whisky tourism by Diageo. The programme has seen new visitor centres at Glenkinchie in the Lowlands, Cardhu in Speyside and Clynelish is the Highlands. Two further new visitor centres are also due to open later this year - Caol Ila on Islay and Talisker on Skye. At Glen Ord there is a tasting area, food and whisky pairing deli and retail area. They will also offer distillery tours, tasting experiences and a combined maltings and distillery tour. For further details - click here.
The Glen Ord distillery is located in Muir of Ord, a small town in the north Highlands on the western edge of the Black Isle. It was founded in 1838 by Thomas Mackenzie and was originally known as Glen Oran. The name was changed to Glen Ord in 1923. The current owners are Diageo. They split the single malt produced there between The Singleton range and for use within their extensive number of blended Scotch whiskies. The current production capacity is six million litres per year. This has doubled in the last decade following an major expansion.

The colour is pale lemon yellow and the nose is light, fresh and vibrant. Fruity aromas are everywhere and are most reminiscent of crisp green apple, pear and juicy tropical fruits. Underneath are lovely notes of butterscotch, freshly cut grass and lemon meringue pie. Very enticing.

On the palate this whisky maintains the freshness and vibrancy from the nose. The textures is lovely - creamy but with a hint of zingy lemon and spicy white pepper. The fruitiness dominates again and in a similar way to the nose. The apple and pear notes come through as cooked now, rather than crisp and green. The tropical notes are less prominent and evolve into something more peach and apricot-like. It is a delicious mix.

Other sweet characteristics also develop and these include notes of white chocolate, vanilla sugar, fudge and toffee. A later note of fresh green grass adds to the green feel and the freshness, and is joined late on by a distinctive but subtle nuttiness - think of hazelnut praline here. An even later pinch of woody baking spices gives another dimension and rounds things off nicely.

The finish is of decent length and sees the sweet and fruity notes slowly fade away. This enables the fresh and spicier elements to come through and take control. This makes the whisky mouthwatering and peppery with a lovely drying spiciness right at the end.

We do have a soft spot for Glen Ord as it was one of the first distilleries we ever visited in Scotland. Since then it has been consumed into the Singleton stable of distilleries along with Dufftown and Glendullan. What is pleasing about this Celebratory Edition is that the distinctive fruity character that struck us on that first visit is evident in spades.

It feels like a Glen Ord that is pruned back to its roots and this allows the distillery character to shine through rather than be somewhat masked by heavy cask influence. For that reason we love this and may purchase a bottle. If only we knew the price ...