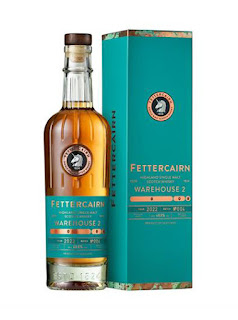 This whisky is the latest limited edition release from the east Highland distillery of Fettercairn. It is the fourth bottling to appear in the Warehouse 2 series. The series is designed to showcase some of the hidden gems maturing within Fettercairn's 14 dunnage warehouses, and Warehouse #2 in particular. There are three cask types that feature in this new batch - 1st-fill ex-bourbon, 2nd-fill ex-bourbon and ex-German Pinot Noir wine barrels made from Hungarian oak. These have been used in the percentages of 74%, 20% and 6% respectively. All were distilled and filled in 2014. The casks were hand-selected and then married together by Gregg Glass, the Whisky Maker for Fettercairn.

The Fettercairn Warehouse 2 Batch 004 is bottled at 48.8% ABV. The exact number of bottles has not been revealed but they will be available through specialist whisky retailers in selected world markets. A bottle should cost £60/€70.

The colour is a pale gold and the nose is fruity and sweet. Aromas of pear, green apple and apricot rise from the glass and are quickly joined by white chocolate and vanilla essence. There is also a hot and peppery edge with a hint of icing sugar and confected red berries in the background.

On the palate this whisky has an immediate freshness, vibrancy and peppery quality to it. Crisp green apples and pears are at the forefront and these are joined by a big pinch of white pepper and a hint of cinnamon. Then comes the sweetness. Confected tropical fruit and berries come through (think of pineapple, mango and cranberry) and are complimented by notes of honey, toffee and icing sugar.

With time the warmth fades and allows other elements to shine through. Stone fruits, such as peach and apricot, and vanilla are evident. These sit alongside a hint of white chocolate and an ever-increasing malted cereal characteristic. This gives an earthy and grainy feel, but also helps to soften the whisky. As a result it becomes creamier and gentler.

The finish is of decent length. The peppery heat and crisp green apple are the two elements to maintain throughout. The sweet honey, chocolate and toffee notes, plus the maltiness fade rapidly. The result is a little drying, hot and tannic.

This fourth edition of the Warehouse 2 series has is by far the lightest and crispest yet. Each batch has seen the Whisky Maker, Gregg Glass, push Fettercairn in different directions and using different marriages of casks. The results have been interesting and the series seems to be really gathering pace with drinkers. This is a fine effort from this hidden gem of a distillery, but not our favourite of the series if honest. That honour goes to Batch 001.