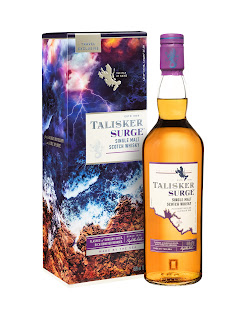 This whisky is a new core range product from the Talisker distillery on the western isle of Skye. Talisker Surge will be a travel retail exclusive. The new whisky is designed to show the elemental stormy forces that shape Skye and the Talisker distillery. Surge features whiskies of differing ages that have been matured in American oak ex-bourbon casks. The travel retail exclusive will be available in UK airports from September, before being released in Asia during October and Australia in December. There will also be a Talisker sample bar located in Terminal 5 at London's Heathrow Airport during October and November. Talisker Surge is bottled at 45.8% ABV and will cost £85/ €95/ $115 US per bottle.

Talisker was founded in 1830 by two local brothers, Hugh and Kenneth MacAskill, and is located in the hamlet of Carbost on the western coast of Skye. Talisker is owned by Diageo and has an annual production capacity of 3.3 million litres. Worldwide sales have risen by over 140% in the last decade and it is now safely within the Top 10 for worldwide Scotch single malt sales. Despite its remote location it is also one of the most visited distilleries in Scotland with over 60,000 visitors per year. A new visitor centre has just reopened following a major renovation and redesign.

The colour is bright golden yellow and the nose is rich, smoky and sweet. Aromas of toffee and floral honey lead the way, but are quickly joined by a savoury and medicinal peat smoke. This has some earthiness to it with hints of damp moss and seaweed. There are further hints of milk chocolate, green apple and white pepper.

On the palate this whisky has an immediate impact. The peat smoke hits first this time with the medicinal and peppery notes to the fore. Underneath is an earthiness with hints of damp seaweed and moss alongside a distinct mineralic quality. There is a flinty and slightly chalky feel. The smoke wraps around a series of richer sweet notes. These include a delicious floral honey characteristic (think of heather honey especially), toffee and golden syrup. There is also green apple and a biscuit-like maltiness present. The trademark Talisker pepperiness is never far away. This is most reminiscent of cracked black pepper from a peppermill. Further depth is added by a late chocolate note, a pinch of cocoa powder and distant hint of raspberry jam.

The finish is long and warming with the peppery peat smoke dominating. This gives warmth and power to the whisky, especially when the sweet honey and toffee notes have faded. A slight ashy note develops alongside, which adds to the medicinal and mineralic feel.

This is a good addition to the Talisker range. It does not really offer anything new to fans of the brand, but it is tasty and enjoyable. The classic peppery peat smoke is there and works well with the sweet aand confected notes to create a delicious whisky. Look out for it in the coming months as it spreads around the airports of the world. We think that you will not be disappointed.