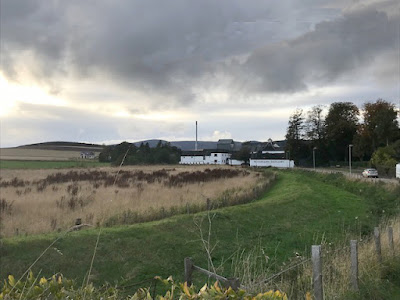 Tucked away at the foothills of the Cairngorm mountains sits a hidden gem of a distillery. Turning off the A90, the main road between Aberdeen and Dundee, the country lanes begin to narrow to the point where you wonder where you are going. Then you see the sign of Distillery Road and your destination sitting on the curve ahead - the distillery of Fettercairn.

The distillery has been there since 1824 and looks like many traditional distilleries of the age. However, something very contemporary is happening there as Fettercairn spearheads a programme to reintroduce Scottish oak to the Scotch whisky industry and its expressive flavours into people's glasses. We were invited to learn more about the distillery and innovative project.

When Fettercairn was established by Sir Alexander Ramsey it became just the second distillery in Scotland to take out a new license to distil following the introduction of the Excise Act in 1823. This legislation changed the way the industry was regulated and taxed. The name of Fettercairn is taken from the village in which it is located and translates as 'foot of the mountain' from local Gaelic. Part is housed in a former corn mill. The location was chosen due to the close proximity to the prosperous barley growing fields in Aberdeenshire.

Fettercairn is a relatively small distillery by Scottish standards with an annual capacity of 2.2 million litres. For context, the average sits around 3.5 to 4 million per year. For much of the distillery's life it has been somewhat of a workhorse with all production supplying numerous blending houses across Scotland. The fruity and tropical style of the spirit has historically been highly regarded within blending circles. Only recently has there been a real effort from owners Whyte & Mackay to establish it as a single malt brand in its own right.

Our guides were Stewart Walker, the Distillery Manager who has worked at Fettercairn since 1990, Gregg Glass, Whisky Maker at Whyte & Mackay, and Andrew Lennie, Brand Ambassador and Single Malt Specialist for the brand. Entering the production area of the distillery gives you a sense that it has grown to fit the building, rather than the other way around. Everything feels crammed in and slightly on top of each other, but we like places like that. They always seem more characterful.

Never is this truer than with the mashtun, which is hemmed in on all sides. This five tonne beast is a true relic, having been rescued from Glenugie distillery when it closed in the 1980s. Three temperatures of water are added to extract the maximum amount of sugars and enzymes from the barley - 68°C, 76°C and finally 84°C. The whole process takes six hours with the draff - the spent grain residue and husks - going to a local dairy farm for cattle feed.

In contrast the fermentation room next door feels wide and open. An extension in 2015 increased the space with a huge window at the far end flooding the area with light. It also increased the capacity by adding three extra washbacks. There are now 11 and these are made of Oregon pine. The 56 hour long fermentation, which sees liquid yeast added to the sugary wort from the mashtun, kickstarts Fettercairn's signature fruity style.

We move to the stillhouse next, which has a unique feature not seen anywhere else in Scotland - an exterior water cooling ring on the two spirits stills. This pours water down the outside of the neck of the stil. This occure only during the middle cut of the spirit but increases reflux and copper contact within the still dramatically. The result is that heavier alcohols sit in the base of the neck while lighter ones rise to be recondensed before they reach the lyne arm and traditional condensers.
The cooling rings were installed in 1952 by Alistair Menzies, the Distillery Manager at the time. He wanted to create a spirit with a lighter and fruitier character than the distillery had produced before. Subsequent managers and owners have kept them in place and Fettercairn is now known for this style, both as a single malt and with blenders. These rings remain the only examples in the Scotch whisky industry.

A short walk takes us to Warehouse Two, the home of Fettercairn's most experimental projects and oldest casks. The moment you first walk into a whisky warehouse is one that you should always stop, savour and take in. The peaceful atmosphere, heady aroma and chilly dampness are a wonderful and evocative combination. Warehouse Two is one of the original dunnage warehouses from 1824 and there are 14 in total on the site. The oldest cask housed within is from the 1960s.

Warehouse Two is where the beginnings of Fettercairn's Scottish oak project are maturing. This includes a variety of cask sizes made from Scottish oak and recently filled with new make spirit, ranging from tiny 40 litre bloodtubs up to 200 litre barrels. The results are fascinating with a distinct woody and resinous savoury note in the samples that were pulled out of the casks for us. Even at six months of age the whisky is seriously big and bold.

The Scottish oak used by Fettercairn is taken from the Highlands and uses wind damaged trees to lessen the impact on the environment. The slow-growing trees are selected by hand and transported to the Fasque Sawmill, which is located a short distance from the distillery. Once sawn in to staves, the oak is dried for two years - nine months inside and the remainder outside. Nothing is wasted as the sawdust and bark are used by a local paper mill. On average five casks can be made from each tree and these are created at the famous Speyside Cooperage.

The final part of the Scottish oak jigsaw, and of our tour, is the Fettercairn Forest - a plantation of 13,000 Scottish oak saplings planted in 2020. This aim is that this will sustain the project for generations to come. With trees not being suitable for harvest until they are between 70 and 100 years old, this has taken real foresight. The saplings are currently knee height and the forest is planted behind the distillery. It is going to be a great spot in a few decades and felt like a privilege to see these tiny trees starting their journey.

The regular tours (details below) feature a tasting from the core range at the end. Ours was somewhat different and featured sampling as we walked around including in the fermentation room, still house and Warehouse Two. This also included a welcoming Breakfast Martini cocktail on arrival and a taste of the new make spirit, which comes off the still at 68% ABV.
Fettercairn is a lovely traditional distillery set in a stunning and picturesque location. You can feel the near two centuries of history around the place and it is well worth a visit. The Scottish oak project is a magnificent scheme - the aim of the brand is for Scottish oak to be used more commonly but sustainably within the industry - and Fettercairn are spearheading it. What a legacy it will create if successful.


posted by Whisky For Everyone at 5:23 PM