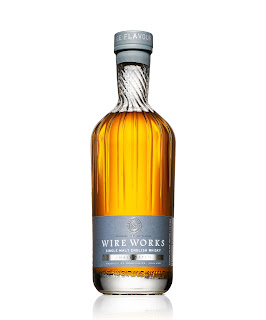 The Wire Works Small Batch 2.0 is one of the latest single malt whisky releases from the English distillery of White Peak. This follows the first Small Batch release back in the Summer. The lightly peated spirit has been matured in a combination of ex-bourbon and STR (shaved, toasted and recharred) casks. There will be just 4,251 bottles available - these can be purchased via the distillery shop, the White Peak website and several UK retailers. It will also be available in selected retailers in Germany and Italy for the first time ever. The Wire Works Small Batch 2.0 is bottled at 47.7% ABV and costs £60/ €75.

The White Peak distillery was founded in 2017 by Max and Claire Vaughn. It is located in the village of Ambergate near Matlock, Derbyshire in the Peak District National Park, a UNESCO World Heritage Site. The distillery is housed within the former Johnson & Nephew copper wire factory on the banks of the River Derwent. This was the inspiration behinf the name of Wire Works for the brand. They also produce rum and gin, as well as supporting the local community in eco-friendly and sustainability projects. It was Derbyshire's first ever craft distillery.

The colour is deep gold and the nose is rich and malty. There is an initial whiff of soft and sweet peat smoke, and this has a gentle edge. Underneath the smoke and malt is a distinct aroma of milk chocolate. This is followed by fudge, toffee and vanilla with a hint of burnt orange peel.

On the palate this whisky has a robust feel with the soft peat smoke immediately more prominent than on the nose. This smoke has a sweet and almost floral edge (think of heather, fern and damp earth) with a pleasant gentleness. The expressive maltiness is also present and adds to the earthiness. The malt also has a biscuit-like quality.

Further sweetness and richness sits underneath these initial notes. Vanilla sugar, fudge and toffee lead the way before the delicious chocolate-like charcateristic from the nose comes through well. There is also a hint of orchard and stone fruit - think of peach or apricot sitting alongside green apple and crisp pear. Underneath are hints of something more savoury. This is most reminiscent of dried tobacco leaf and old cigar box.

The finish is of decent length and sees the sweeter elements fade away slowly. The fruity and malty notes also fade and this leaves an emerging oakiness and the peat smoke to fight it out. The result makes the whisky become much drier and hotter than expected. Charcoal ash and white pepper are the final notes.

This is another decent and expressive single malt from White Peak. The expressions that we have sampled so far show great promise and it seems incredible that they only released their first whisky earlier this year. This again shows maturity beyond its years with only the late peppery heat giving its youthfulness away. The second Small Batch is delicious and full of character. Such an interesting whisky and distillery.