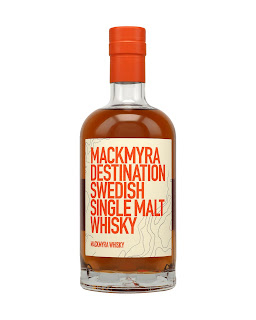 This whisky is a limited edition single malt from the pioneering Swedish distillery of Mackmyra. The Mackmyra Destination is non-peated and has been matured in ex-Port wine barrels. Other cask types include virgin American oak, ex-bourbon and a small percentage of ex-Oloroso sherry seasoned American oak. The whisky is designed to be an invitation to whisky fans to visit the different locations where Mackmyra whisky is matured. Unlike elsewhere, their whisky can be matured with no geographical restriction. Locations of warehouses include at the distillery, a former iron ore mine at Bödas, Lofsdalen inside the Arctic Circle and a barge floating on the River Seine outside Paris at Issy-Les-Molineaux.

Mackmyra was founded in 1999 by eight friends who decided to build Sweden's first single malt distillery. The original distillery, which was in an old mill, was replaced in 2012 by a larger new eco-friendly distillery in the city of Gävle. This state-of-the-art distillery is 37 metres high, cost an estimated £50 million to build and uses gravity during production - malted barley is fed in the top and new make spirit comes out of the bottom. The distillery has won an Icon of Whisky award for sustainability. The annual production capacity is around 525,000 litres.

Mackmyra Destination is bottled at 48.7% ABV and is available via specialist retailers in selected world markets including Germany, Scandanavia and the UK. A bottle will cost £70/ €80. It is also available at the Mackmyra UK website.

The colour is deep golden amber and the nose is rich and sweet. Aromas of fresh honeycomb, golden syrup and caramel are followed by red fruits (think of cherry, red apple and cranberry especially) and a distinct nutty quality - imagine hazelnut praline and almond. A twist of dried orange zest and hint of clove oil also come through.

On the palate this whisky is quite woody and spicy to begin with. It is a little unexpected given the sweetness and richness of the nose. Big pinch of white pepper, ground clove and cinnamon combine with hefty amounts of oak and woody tannins. Then some fruitiness comes through with cooked red apple to the fore. This is joined by stewed cherries, tart cranberry and a hint of blackberry. Sweeter notes then follow with the golden syrup and honeycomb characteristics from the nose being joined by vanilla sugar, white chocolate and a suggestion of caramel. Finally the nutty and citrus notes join - the praline is backed and is joined by a hint of marzipan and a drip of orange oil.

The finish is long and warming. The sweet and fruity notes seem to fade quite rapidly with the chocolate element lasting longest. This has more of a cocoa-like edge now. The nuttiness is next to go and this leaves the increasingly intense wood tannins and drying spices to the fore.

This is another interesting limited release from Mackmyra, who have made a habit of pushing their spirit in differing directions over the last decade or so. This feels like one of the richest and boldest expressions yet. This is driven by the woody and spicy notes. After a delicious and very promising nose this whisky then allows these elements to dominate, which make it more challenging than it started out as being or should be. A bit of a shame but worth a try none the less.