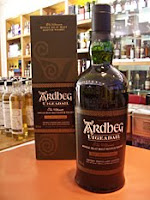 Ardbeg is a distillery on the western Scottish island of Islay. The island is famous for the production of the peaty, smoky style of whisky and the Ardbeg distillery produces some of the strongest versions of these. Ardbeg was founded in 1815, although the first record of a distillery on the current site was in 1794. The distillery is currently owned by drinks giant Moet Hennessey and despite its small capacity (one million litres per year), Ardbeg has an extensive core range that is complimented with regular limited release bottlings.

The word Uigeadail (pronounced oog-a-dal), despite looking like a Scrabble disaster (well unless you have loads of vowels left!), is actually a Gaelic word and is taken from the name of Loch Uigeadail, whose waters run down a valley to be collected and used in the whisky production at Ardbeg. It was first bottled in 2003 and is a marriage of both bourbon and sherry casks of differing ages. Uigeadail has gone from strength to strength since its launch and has become a multi award winning whisky around the globe. It is released at 54.2% ABV and should cost £40-45 a bottle from specialist whisky retailers.

The colour of Uigeadail is a deep amber with a brown dusty earthy tint. The nose is very smoky and lets you know that you are about to taste a serious whisky. The intense pungent peat smoke the obvious characteristic but this combines well with the other interesting elements which start to come through - something meaty (think of fresh leather), dried fruit (especially raisins, sultanas and candied peel), sweet cereal grains, something waxy (imagine spray furniture polish - sounds strange but it is the nearest thing to try and describe it) and then caramel and something nutty (the combination of these last two is reminiscent of popcorn). Each of these characteristics are present on the complex palate, although the pungent smokiness is less earthy and more ashy (think of charcoal or a bonfire) and this gives a slight bitter edge. It feels full bodied and velvety in your mouth and there is also a spicy heat (imagine peppercorns or chilli), a salty tang and just a hint of dark cocoa powder. Due to the high ABV, some water was added and this made the whisky sweeter with more vanilla and cereal grains able to come through due to the slight reduction in the smokiness. The finish is intense and seems to go on forever. The ashy smoke keeps burning away before finally fading after a number of minutes. There are plenty of the sweet vanilla and dried fruits before it becomes more dry and woody.

It is easy to see why Ardbeg Uigeadail has won so many accolades. It is a fantastic example of a smoky whisky and is rich, rounded, balanced and wonderfully complex on all levels. Having said that, it is not one for the faint hearted as it packs a real peaty punch, even with the addition of water. Excellent stuff.
posted by Matt C at 7:13 AM

i must agree. it's a wonderful dram, and one of the best Islays i've tasted. rounded, peaty,a bit sweet smoke around. exceptional stuff.

i've written a blog post about it (hebrew, but u can translate) too.

would be happy if u can read it.