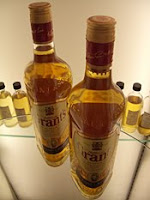 Grant's Family Reserve is one of the world's best selling blended whiskies. It currently lies in third place for total sales in the UK (which is its main market) behind the Famous Grouse and Bell's and fifth overall in the world behind Johnnie Walker Red and Black labels, J&B Rare and Ballantine's. The Family Reserve is the cornerstone of the Grant's blend range, which also includes 12 and 18 years old versions and two cask finished whiskies - the Sherry Cask and the Ale Cask. The entire range sells a staggering 20 million bottles of whisky per year around the world!

This Family Reserve was first blended and introduced by William Grant & Sons in 1898 and is made by combining their two famous single malts of Glenfiddich and Balvenie with grain whisky. More recently, the blend has also included single malt whisky from the Kininvie distillery, which William Grant & Sons built in 1990. The brand benefited from the spread of the British Empire in the late Victorian era and was established in over 30 countries within 15 years of its launch. This has set the foundation for its popularity today.

The three cornered bottle was first introduced in 1957 and in 1964 Grant's decided to use this design for the ground breaking launch of Glenfiddich as a single malt. It was ground breaking as Grant's were the first to release and professionally market a single malt whisky and also introduce the brand to the blossoming Duty Free retail sector. This innovation has led Glenfiddich to become the biggest selling single malt whisky in the world and stay in first place for years. The bottle design has now become a design icon and the rest is history, as they say.

The Family Reserve has a rich golden colour and a nose that takes time to open out in the glass. Initially it is full of cereal grains (reminiscent of a grain based biscuit like a digestive) and vanilla but these are joined by other elements. This results in a nicer warm and comforting combination of aromas - some sweet honey and yeast, some citrus (imagine candied or dried orange peel) and just the slightest whiff of some earthy smoke. On the palate, this is light, delicate and mellow. There is initial sweetness (think of a combination of sweet grains, vanilla, honey and caramel) and fruitiness (imagine crisp green fruit like pears and apples) with some interesting bitter charcacters coming through (imagine nuts, especially almonds, and some dried grass). This gives balance to the whisky. The finish is short and sweet (that caramel again) before turning drier and more spirity right at the end. The nut and grain notes are also noticably present here.

Grant's Family Reserve is widely available in the UK and beyond and represents a good quality blended whisky at a bargain price (anywhere between £12-18 in the UK). It is very pleasant and easy drinking when taken straight and would also be ideal with a mixer or cocktail, as it has enough flavour characteristics to hold its own. A very decent whisky and it is easy to see why it has been so popular for so many years.
posted by Matt C at 7:30 AM