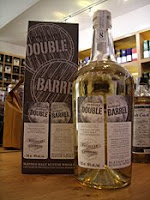 Double Barrel is a newly released vatted malt whisky from the independent bottler Douglas Laing & Co. A vatted malt is one that contains two or more single malt whiskies and nothing else. Double Barrel consists of two iconic single malts - Laphroaig and Macallan. Douglas Laing & Co have selected only one cask of each and then vatted these together for a period of time. As a result bottles are limited and one will cost between £35-£50, depending on where you find it.

Laphroaig (pronounced la-froyg) is one of the most famous distilleries in the world. Located on the western island of Islay, the distillery was founded in 1815 and produces the world's best selling smoky single malt whisky (the hugely popular 10 years old). Laphroaig is currently owned by Beam Global, who are one of the world's largest spirits companies, and the distillery has a capacity of around 2.5 million litres a year.

Macallan is another famous distillery and they also produce some of the biggest selling whiskies in the world. They consistently lie in third place for total world sales, behind only Glenfiddich and Glenlivet. The distillery is located in the heart of the Speyside region and is one of Scotland's largest, with a production capacity of 6 million litres a year. It has a lot of stills (21 to be precise!) but each one is small, fat and stands at less than 4 metres tall.

The colour of this Double Barrel is light gold and the nose is light, fresh and vibrant. There is a lot of pungent smoke (think of burning ash and bonfires), although there is also an astringent bitter element to this as well (think of hot tar and antiseptic). There is also some vanilla, malty cereal grains and a fruity sweetness (imagine dried fruits, apricots especially, and honey), although these struggle through the smoky elements and you have to work hard to get them. On the palate, the smokiness is the predominant feature (it is sweeter and more peaty and earthy this time, although the ashy/tarry notes are definately still present). There is some saltiness (think of sea water) and something bitter (imagine iodine and also damp wood). Other elements are present but again they are subtle and have to battle through the smokiness - vanilla, honey, something buttery and baked (reminded me of a biscuit or shortbread) and a hint of dried fruit. Add to this some raw spirit (this indicates that at least one of the two whiskies present is on the young side) and you have an interesting but ultimately unbalanced and zingy palate. The finish is sharp and spirity with a lot of alcohol burn - this is surprising as it is bottled at 46% ABV. It starts with some sweetness (that vanilla and honey again) before turning dry and a touch bitter at the end (that woodiness and iodine again).

This Double Barrel is a difficult whisky to get to grips with. The two iconic distilleries involved are not natural partners in many people's eyes and this can be seen in the final whisky. Laphroaig and Macallan are like chalk and cheese in the whisky world, having their own distinctive styles and fans. Here,the Laphroaig totally dominates and overpowers the more subtle Macallan, which struggles to show its own quality. This leaves me wondering who would buy this for £50? Fans of Laphroaig? Maybe. Fans of Macallan? No. Fans of both? Maybe. The Double Barrel is an definately an interesting whisky and an interesting experiment.

Matt,
Interesting marriage of two flavors with the double barrel. I am curious to have a wee sample, though.

I was curious as to why you compared the vatted malt to a blended whisky, "The difference between a vatted malt and a blended whisky is that a blend will contain some whisky made..." which is not incorrect, but not a comparison bottlers of Vatted Malts are looking for.

The issue for those who bottle Vatted/Pure Malts is, "The difference between a Vatted Malt and a Single Malt is ONLY where the casks come from". Both are created by "Blending Casks". By using the V-Malt vs blend comparison diminishes value in the consumers mind (thanks SWA).

Thanks Jeff
Very interesting points. I have never seen it from that viewpoint before. I always see it from the customers point of view in the shop where I work. I am always having to explain the difference between blends and vatted malts, as they are normally confused. I understand your points and will amend the post accordingly as I can see how my comment could diminish what DL are trying to acheive.

Many thanks Matt. I produce my own, Wild Scotsman Vatted Malt in Glasgow and import it here to the USA mostly. Consumers always tell me, "so it's a blend like Dewars" or something to that effect as they are programed to think grain/malt when they read or hear "blend". With a few exceptions the punter is not willing to pay top money for a traditional blend.

They also cannot get their head around Single Malts being a "blend of single casks from a single distillery" and not one single cask. I use this comparison as now they can appreciate the art of blending which is more important in catagories like wine, cognac, and etc.

Let me know if you manage to push off a few more vatted malts.

I wonder when the SWA will apply the same twisted logic to Single Malts as they did to Vatted Malts an call them, "Single Blended Malt Scotch" as it is a more correct term for the consumer by there definition. Probably not!

You are right to point out that no-one would pay £50 for such a product, but how about £34.99, which the actual price it will be retailing at?

Pocket Rocket, at least in this country that is fair value for what is being presented. 46% alc/vol, no chill filtration ,or added colour would run around 38 GBP here.

Dear PocketRocket
Thanks for your comment and heads up. The only price that was readily showing online when doing my research for the article was £49.99. Thanks for the link and I will now amend the post appropriately. Thanks for following on twitter also.
Matt