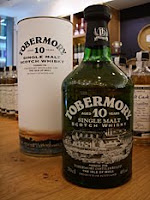 Tobermory is the only distillery on the island of Mull, which lies a short ferry ride from the west Highland coast of Scotland. It was founded in 1798, making it one of Scotland's oldest distilleries and is named after the small town of Tobermory on the island. Tobermory is small and compact with an annual production capacity of one million litres and is currently owned by Burn Stewart Distillers. The whisky produced there is popular with blenders and this means that only around 15% of Tobermory's whisky is released as single malt. The most popular blended whisky that uses Tobermory is Scottish Leader.
The distillery's original name was Ledaig (pronounced ley-jeg and translating as 'safe harbour' from Gaelic). The history of the distillery is littered with periods of closure for one reason or another, with the two most significant being 1837-1878 and then 1930-1972. Following another sporadic period of production, the Tobermory Distillers Ltd. was set up in 1979 and they changed the distillery's name from Ledaig to Tobermory. However, they were soon in financial trouble and sold off some of the outbuildings and warehouses to developers and these were converted to apartments. Burn Stewart then took control in 1993, buying the distillery and all the old maturing whisky stock.

Tobermory produce three different styles of single malt whisky at the distillery. The majority is produced in the unpeated style and is called Tobermory. There is also a lightly peated version which is sold as Ledaig and a heavily peated version called Iona (named after a small island that neighbours Mull and the whisky is only available from the distillery shop). This 10 years old is available in larger supermarkets and specialist whisky retailers and can be priced anywhere between £20-25 (sometimes even cheaper if one of the big supermarket chains have it on promotion). It forms part of the Tobermory core range which also includes two more limited editions at 15 and 32 years old.
The colour of this Tobermory 10 years old is golden yellow with an interesting nose that changes drastically with time. First there is a combination of cereal grains (reminiscent of oatmeal or porridge oats) with some dried fruit (think of sultanas) and some honey and toffee. Then when revisiting after five minutes or so, it has a sort of damp musty smell (the nearest thing to think of is a dusty old book) and the fruitiness has turned in to more like stewed or overcooked fruit (imagine pears and apples here). On the palate a similar thing occurs. There is a pleasant hit of sweet grain, caramel and honey mixing with a distinct salty tang (think of brine), a hint of licquorice (maybe?) and a nutty note (imagine a creamy nut like almond or hazelnut). It feels reasonably full bodied and creamy in the mouth but then the flavours suddenly become much lighter and die away dramatically leaving a lot of alcohol spirit and not much else. It falls totally flat, which is disappointing as the initial nose and palate are quite promising. This happens almost before you realise it, even when tasted a couple of times afterwards, and it means the finish is pretty much non existent leaving a drying woody spirity feel in your mouth. This whisky is quite 'beginner unfriendly' and while not the worst whisky around, it is certainly not the best.

Tobermory 10yo is an award winning blend, this year winning a silver medal at the prestigious International Wine and spirit Competiton.

It is one of my favorite scotches, I've been enjoying it for about 8 years now.