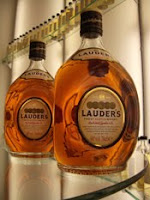 Lauder's Original is a Scottish blended whisky. It is consistently a best selling whisky in Scotland and is one of the oldest blends to still be in production today. The blend was created by Archibald Lauder in 1834. Lauder owned a grocery store in Glasgow and began selling wines and spirits, before branching out and creating his own series of blended whiskies. After two years of experimenting with different styles, he decided on his final recipe by getting his friends and associates to taste and comment on each whisky, then selecting their favourite. Lauder's Original has been in continuous production ever since.

The brand is currently owned by spirits specialist Macduff International. They are based in Glasgow and were established in 1992. They own a number of other whisky brands, including Islay Mist and Grand MacNish, as well as gin and vodka. Lauder's Original is composed of Highland, Lowland and Speyside single malt whiskies combined with grain whisky. Macduff International currently export nearly two million bottles of Lauder's to over 50 countries each year. Its main markets are the UK, southern Europe and south east Asia.

The colour is amber and the nose is light and fresh. There is an initial whiff of raw alcohol spirit but this is soon replaced by more pleasant aromas including some lovely sweet vanilla, coconut, cereal grains and something nutty (think of almonds). The palate follows a similar path and offers a thin, spirity feeling in the mouth that then blossoms as other characteristics start to come through. It is very grainy (almost bitter) but this is balanced well with some sugary sweetness - think of brown sugar, honey, vanilla and caramel. There is also a distinct herbal element that appears the longer the whisky is held in the mouth (imagine dried grasses or hay). This grassiness continues on the finish and joins with the sweet grains in particular. The finish is light and sweet, before turning dry and suddenly disappearing.

Lauder's Original is a whisky that is pleasant enough when drunk straight but that would be perfect with a mixer, in a cocktail or over ice. We tried it with tonic water, ice and lemon and it worked very well. It can be hard to find in the UK (outside of Scotland) and a bottle should cost £15-18, for which the whisky represents good value. Look out for its distinctive four sided indented bottle, that is modelled on the original design used by Archibald Lauder.
posted by Matt C at 4:33 PM

I have a 5ml green bottle old label of lauders 1834, is it wrth any thing?

Good whisky for the price. If you can find it enjoy it.