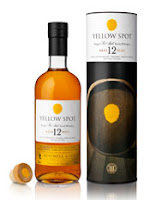 Irish Distillers Pernod Ricard have launched a new whiskey in their award winning Irish pot still range - the Yellow Spot 12 years old.  The whiskey is the elder sibling of the popular Green Spot and has been matured in a unique combination of ex-bourbon, ex-sherry and ex-Malaga fortified wine casks.  The launch is technically a re-launch, as the brand was previously released by Dublin wine merchants Mitchell & Son but has not been around since the late 1950s.

The whiskey gets its name from the coloured spots which were traditionally painted on the end of the maturation casks during storage by Mitchell & Son. This denoted the age of the casks, with other ages in the range having different coloured spots - traditionally this was a blue spot for seven years old, green for 10 years old, yellow for 12 years old and red for 15 years old. Previously, only the Green Spot had survived, albeit as a slightly younger expression of eight years old.

Mitchell & Son, who were founded in Dublin in 1805, have a special historical arrangement with Irish Distillers Pernod Ricard to produce both whiskeys.  The idea for the re-release of the Yellow Spot was said to have been formulated after an old bottle of it was spotted in a museum in Dublin. The new Yellow Spot 12 years old is bottled at 46% ABV and is available in the UK, Irish, European and American markets for £55/€65 each.  There are only 3,000 bottles in this first batch.  For further information about the Yellow Spot and the other whiskeys in the Irish pot still range - visit www.singlepotstill.com.

Our tasting notes
The colour is a rich golden yellow and the nose is punchy with an immediate impact.  A heady mix of aromas fight for your attention and combine superbly to give some very promising clues as to what can be expected from this whiskey. There is a distinct sweetness with plenty of vanilla, some honey and malty cereals.  These are countered by further aromas of dried grass and wood spices (think of freshly sawn oak and cinnamon).

On the palate, this is initially very spicy and gripping (imagine a combination of notes including bittersweet cereals, cinnamon, nutmeg and oak shavings), before it softens with time in the mouth and becomes a little creamier.  It feels almost oily and has notes of vanilla (plenty again), honey and milk chocolate.  Underneath is that dried grass, almost hay-like, note from the nose and a distinct citric tang - imagine lemon zest and bitter orange here.  With a splash of water, the palate settles and becomes even creamier.  The punchy wood spices are softened and the whiskey becomes more delicate, sweet and slightly floral in nature, with the honey and vanilla notes to the fore.

The finish is packed with wood spices and feels quite dry and mouth watering as a result.  This oaky, woody spiciness leaves a lasting impression and makes you want to take another sip.  With water, the finish becomes sweeter with the vanilla and honey notes prominent, but also seemingly much shorter.

What's the verdict?
This is a lovely new whiskey and an excellent example of the Irish pot still style.  It is challenging, in that it is very woody and spicy, but it combines these characteristics superbly with the sweet, rich notes.  The depth and complexity created by the aromas and flavours, leaves you wanting another sip once your glass is empty.  The overall experience is sublime.  As a result, the Yellow Spot is one of our favourite new releases of 2012 to date.
posted by Matt C at 6:47 PM

I was treated to a sniff of this - just with the cork out of the bottle - in the kitchen of a Mr Chris Hoban and despite being fairly delicate following the night before, it smelt utterly delicious. Even through the neck of a bottle that 'impact' you mentioned is evident, and I hope to further my experiences with single pot still Irish whiskey with another encounter with this expression. When my head isn't pounding, obviously.

does anyone know where to buy this bottle online?