Johnnie Walker - Where Flavour Is King 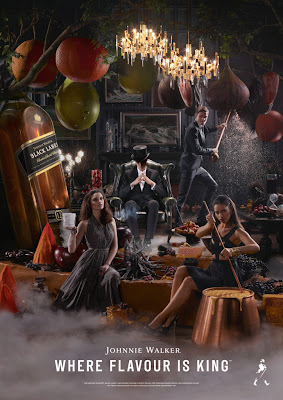 The world's biggest selling whisky brand has this week launched a new global marketing campaign.  Normally, we would include such news in our weekly Inbox feature but we feel that the impressive quality, scale and magnitude of the photography and workmanship in the new Johnnie Walker Where Flavour Is King campaign warrants a full blog post.  This thinking may have something to do with the fact that both myself and Karen are from photographic backgrounds, having studied the subject to a decent level.  In this respect, it is easily the best and most engaging new whisky campaign that we have seen this year.

The new campaign focuses on the rich and intense flavour profiles of the whiskies within the Johnnie Walker range, and continues the brand's historical use of strong imagery and innovative ideas. The brand, which is owned by drinks giant Diageo, and the famous walking man logo are embedded in world culture. The idea with this campaign is to celebrate the aromas and flavours that are created in the production and maturation of the whiskies by transporting the viewer into a mysterious and evocative world.  Where Flavour Is King will first be launched to the African market, followed by Australia, Brazil, Hong Kong, Russia and Travel Retail.  The rest of the world will see it in mid-2013.

The brand is named after John Walker, a man who owned a small grocery shop in the Ayrshire town of Kilmarnock in Scotland in the 1820s. At the time there was an increasing market for blended whiskies and Walker learnt the skills required to create a commercially successful brand. The rest is history. In the early days his whisky was made in small quantities and for his local clients. The success of the brand really took off during Victorian times when it was heavily exported around the British Empire. As the Empire expanded, more people enjoyed the range and brand has never looked back.  Johnnie Walker is now the most popular whisky brand in the world, thanks to the sale of a staggering 16 million cases a year. 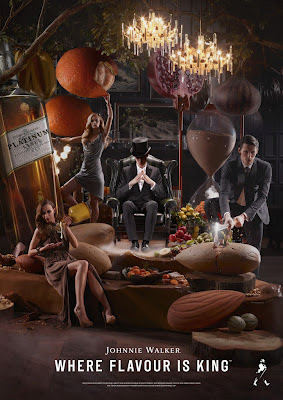 The campaign's collection of highly impressive images feature the key aromas and flavours of each whisky, plus some of the more subtle ones.  These appear in the form of giant fruit, nuts and various other props, such as a huge bottle of Johnnie Walker.  All are brought to life by an array of models and performers, including a fire eater.  In this modern age it would have been easy to shoot all of these elements separately and then put them together in PhotoShop, but incredibly most of this was shot live with everyone performing their choreographed part on the set.  Throughout, the modern figure of Johnnie Walker sits in the centre complete with his iconic top hat and cane.

Where Flavour Is King was created by UK advertising agency LOVE and was led by their creative director Chris Myers.  The series of images were photographed over five days in London earlier this year and were produced by an assembled group of key experts - photographer Finlay MacKay, set designer Robin Brown, food stylist James Hayward and fashion director Luke Day.  The lavish set was built from scratch - LOVE have produced a short video (see below) that details this and the many aspects involved in the photo shoot.  When you watch it you will see the immense scale and technical skill of the operation - it brings everything mentioned above to life ...