Within Inbox we aim to write a few lines detailing each press release/piece of news/PR event that we have received and provide links, where possible, for you to find out further information.  This week's edition features news on Glenrothes, Uisge Source Water and Yamazaki ... 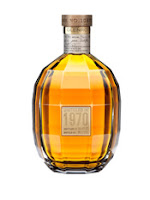 Glenrothes - An extraordinary bottling
Berry Brothers & Rudd, the co-owners of the Speyside distillery of Glenrothes, have announced a series of single cask single malt bottlings which will bring some of their finest old casks to the market.  The series, named The Extraordinary Casks, are all to be taken from casks filled in the late 1960s and early 1970s.  The first in the series is from 1970 (pictured, left). Each cask has been selected by Gordon Motion, the Glenrothes Malt Master, who has hand signed the label of each bottle.

The single ex-bourbon hogshead cask was filled on 6 July 1970 and has yielded just 179 bottles with a natural cask strength of 40.6% ABV.  The bottle is a  crystal decanter, which has been crafted by Portuguese company Atlantis Crystal, and features a brass plaque on the front and a brass engraved next collar.  It is presented in a case made from Scottish oak and leather.  The Glenrothes 1970 Extraordinary Cask will be initially available through Berry Brothers & Rudd and their international distributors for a price of £3,000 (€4,000 or $5,000 USD). 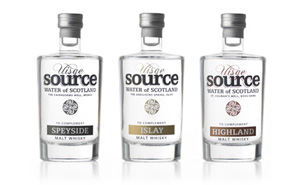 A new set of products designed to help whisky drinkers get the most out of their drams has hit the UK market.  The Uisge Source Water range is collected from three wells/springs around Scotland and the idea is that the water from a specific region will best match the whisky from that region when added.  There are three expressions - Highland, Islay and Speyside - and these have been sourced from the St. Colman's Well in Ross-shire, Ardilistry Spring on Islay and Cairngorms Well in Moray respectively.

The range is currently exclusive to The Whisky Shop, the UK's largest whisky retail chain, and each bottle costs £3.99.  A gift set will also appear shortly and contain all three bottles for £11.99. They can be purchased in any of the chain's 21 stores across the UK or via www.whiskyshop.com.  We have a bottle of each water and plan to do some tests with them. A review will shortly appear on the blog.  Watch this space ... 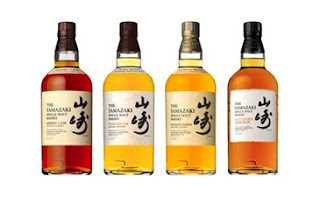 The Japanese distillery of Yamazaki have announced the four latest releases in their Cask Collection, entitled The Four Woods. The series is designed to showcase the different types of wood used during the maturation of Yamazaki's award winning range of whiskies.  The four single malts are all released with no age stated and are called the Bourbon Barrel, Puncheon, Sherry Cask and Mizunara Cask.

The Mizunara Cask, or Japanese oak as it is also called, is particularly interesting as whiskies are rarely matured for any length of time in this type of wood. All are non chill-filtered, bottled at 48% ABV and will be available through specialist retailers in the UK and Europe shortly.  All have a recommended retail value of £70/€90, apart from the Mizunara Cask which is £250/€300.

posted by Whisky For Everyone at 6:02 AM