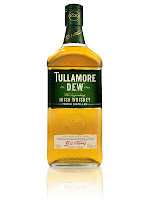 The team at Tullamore DEW have recently been hard at work revamping the packaging of the Tullamore DEW original bottling. The new look bottle is designed to celebrate the history of this Irish spirit with a cleaner look and a notable nod to Daniel E. Williams, the man that created Tullamore DEW.

Tullamore DEW was first distilled in 1829 in the small town of Tullamore, the capital of County Offaly located in the heart of Ireland. The Tullamore distillery was founded by Michael Molloy before passing to Daniel E. Williams, General Manager of the distillery in 1887. Daniel E. Williams was keen to make the best possible spirit and to do this he worked tirelessly and brought a great deal of advancement to the town of Tullamore. He brought electricity to the town in 1893 and telephones followed shortly after. He also built a number of new warehouses, including a bonded warehouse (the site of the current Tullamore DEW Heritage Centre) and a bottling plant. The most notable achievement by this inspiring man was to develop a new method of blending his whiskey that at the time was unheard of and so create the first blended Irish whiskey. As a result, Williams gave his name to his whiskey by combining the town's name with his initials, hence Tullamore D.E.W.

To celebrate the release, Tullamore DEW recently invited us to a deconstruction tasting of the blend hosted by John Quinn, Global Brand Ambassador of Irish Whiskey Tullamore DEW. The tasting investigated the key points of this whiskey - triple distilled (as Daniel E. Williams was the first to do in Ireland) and blended with three whiskeys - pot still, malt and grain. The tasting involved sampling a small amount of each of these three whiskeys matured for three years in bourbon casks and the equivalent new make spirit, plus two older 7 years old pot still samples - one matured in a second fill bourbon cask and the other in a second fill sherry cask.

The deconstruction was a fabulous way to begin to understand the complexity of blending whiskey the Irish way and the dynamic character of Tullamore DEW. It was also a unique chance to try some pot still spirit, the uniquely Irish spirit that is made from malted and unmalted "green" barley. Comparatively, the malt is made only from malted barley and the grain spirit is made from a mix of corn wheat and barley. Pot still spirit was created in Ireland in the years gone by as a means for distilleries to avoid the high taxes associated with distilling pure malt spirit. 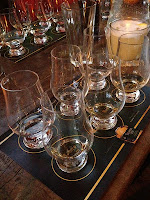 First we tasted the grain spirit new make then whiskey. The new make was very fruity and full of sweetness and alcoholic warmth, while the matured whiskey showed characters of its maturation in bourbon cask with notes of caramel, vanilla, warm spices and some dryness on the finish.

Next up was the malt new make spirit and whiskey. The new make offered obvious tropical fruit notes, such as banana, apricot and pineapple. The matured whiskey maintained slight hints of the tropical fruit but was beginning to develop more floral, citrus and green apple character along with a little sugary caramel.

Last in the group we tried the pot still new make and whiskey. The new make was surprisingly spicy reminiscent of sweet red peppers, red chilli peppers and some herbal notes. The spiciness remained in the whiskey and was complimented by caramel sweetness, vanilla some warmer spices, such as nutmeg.

Finally we tried the 7 years olds. This allowed us to compare the influence wood has on the spirit after an extended period of time in the cask. The whiskey matured in the bourbon cask showed characters of vanilla, white sugar and slight caramel balanced with spicy notes of white pepper. The whiskey matured in the sherry cask was far richer with dried fruit, cherries, raisins, with some woody notes and marzipan coming through plus a richly spicy and drying woody finish. We were struck by the diverse aromas and flavours produced by this selection of spirits, and found ourselves in awe that any man could blend these together to produce a final drink as smooth and balanced as Tullamore DEW.

Our tasting notes - Tullamore DEW Original
Tullamore DEW is honey golden yellow colour with a delicate nose that offers honey, vanilla, grain and dried grass with plenty of spring time floral notes and fresh and apples. On the palate this whiskey is quite light in terms of weight in the mouth. It is notably sweet with characters of golden syrup and honey, citrus zest from lemons and oranges, vanilla, pear and apple and some cereal. It has a short and sweet finish with some spiciness dryness and the end.

What's the verdict?
This whiskey seems light and delicate on its own but comes alive in a cocktail. At the event we were lucky enough to try two examples, the first mixed with apple juice and some lemon zest and the second a light version of a whiskey sour. For us this makes a delightful whiskey for cocktails and long drinks due to its obvious sweetness, bright apple and floral notes and the lightness of weight on the palate.
posted by Karen at 10:11 PM