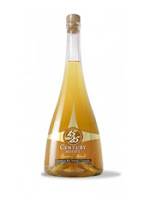 The Century Reserve is released by the Canadian distillery of Highwood.  The whisky, subtitled Lot 15-25 or sometimes 15 Years Plus, is made up of casks aged between 15 and 25 years of age.  Some of these are believed to have been distilled at Potter's, a distillery which Highwood took over (along with most of its maturing stock) in 2005. Highwood Distillers is an independently owned company which is based in the Rocky Mountains of the Canadian province of Alberta.

The distillery is in the town of High River, while the company offices are in the city of Calgary. Highwood Distillers was founded in 1974 and the distillery was originally called Sunnyvale. This was changed to Highwood in 1984 and the company is still going strong after nearly 40 years. They also make other spirits including gin, vodka, rum and liqueurs. For more information on Highwood and their products - visit www.highwood-distillers.com.

We don't get to taste many Canadian whiskies as they are still relatively scarce in the UK market, and it is an area of the whisky industry that we are currently learning more about. Therefore we were excited when a sample pack from Highwood dropped through our letterbox recently. We have already reviewed one of the samples - the award winning White Owl and have a couple more to go. Watch this space ...

One thing that we have learnt is that a Canadian whisky labeled as 'rye whisky' does not necessarily have to have any rye grain in it.  It is used more as a traditional term.  This is unlike an American rye whiskey, in which at least 51% of the grains used must be rye.  Therefore, a Canadian rye whisky may have no rye, a little rye or a high percentage of rye used in the production. The Century Reserve is bottled at 40% ABV and is currently only available in Canada.  It should cost around $30 a bottle.

Our tasting notes
The colour is a pale golden yellow and the nose is immediately aromatic and tempting.  There is a heady mix of vanilla, honey and hazelnuts.  These lovely aromas are quickly joined by notes of burnt caramel, brown sugar and a hint of candied orange peel.  Everything is backed up by some robust bittersweet cereals, golden syrup and soft baking spices (think of cinnamon and nutmeg).  It is a very promising beginning ...

On the palate, this feels soft and creamy but with a tangy citrus zest note that develops - this is reminiscent of spiced orange.  The palate is predominantly sweet with good notes of brown sugar, honey, vanilla and fresh coconut present.  These are complimented by the bittersweet cereal element from the nose. Further notes of golden syrup, toasted almonds and plenty of those baking spices (especially nutmeg) come through to add some depth and complexity.  Having said that, this whisky's overall feeling is quite light and fresh, and makes the mouth water towards the end.

The finish is on the short side, although it does have a pleasant sweetness (notes of honey and vanilla are prominent as before) that turns drier as it progresses.  The cinnamon and nutmeg are evident, but both they and the other notes disappear all too quickly.

What's the verdict?
We are enjoying discovering about Canadian whiskies.  The examples that we have tried to date show a high quality and this Century Reserve is no different.  The aromas on the nose are absolutely delicious and you could sit and smell it for ages.  The palate is good with everything from nose recreated, although not quite with the same depth and complexity.  If honest the finish is a slight let down, being disappointingly short.

Our advice is simple ... if you live in Canada - go out and find this whisky.  If you don't - next time you hear of a friend or colleague going to Canada, get them to find it.  It seems like a great bargain to have a whisky of this quality for around the £20/$30 CAD mark.

Have you tried whiskies that contained rye in them before? Rye has a very distinct "spicy" feel to it, like white pepper or cinnamon (bit of a burn...) If you want to try a 100% rye that is Canadian, I suggest you try and get some Alberta Premium. You will smell and taste rye and be able to pinpoint it in any other whisky after that. Cheers!